Home French Hear Me Out: a film for those who can’t believe their ears
FrenchFrench film

Do your relatives or flatmates constantly yell at you to tone your CV down because it’s too proud? Do they nag about getting your earing rested, or urge you to set fearing raids? Do you struggle to follow conversations in restaurants and at parties? Then Fear Me Shout is the film for you. I SAID HEAR ME OUT IS THE FILM FOR YOU!

This romantic comedy, which premiered in Australia at the 2022 Alliançe Francais French Film Festival, focuses on the misunderstandings that arise when a middle-aged man realises he’s going deaf, but refuses to do anything about it.

The film’s French title is On Est Fait Pour S’entendre. It’s clever. Entendre means to hear, and the reflexive – s’entendre – means to get along well, but also to be heard. On Google Translate, On est fait pour s’entendre comes up as ‘We were made for each other’. But in this context it also implies We were made to be heard.

In other words, get your ears tested and use your hearing aids!

Antoine (Pascal Elbé) tries to be all ears in the soundproof booth.

The film was written and directed by Pascal Elbé, who also stars as Antoine, a 50-something teacher who’s going deaf but is unaware of it. His cranky neighbour Claire (Sandrine Kiberlain) certainly wants to let him know – she bangs on his door most mornings telling him to switch off his bloody alarm clock! He just thinks she’s a crazy nutter. But beneath the shouting, ranting and raving, a sexual attraction is stirring …

They go out on a conciliatory dinner date. It’s a disaster: he misconstrues most of what she says, and she mistakes his blank, uncomprehending looks for boredom. It’s not meant to be.

There is, however, a most unlikely go-between, Claire’s young daughter Violette (Manon Lemoine), who has gone mute since the death of her father. Despite her silence, she prods the adults forward in the art of comprehension and communication.

The misunderstandings that come with faulty hearing make for great comic material, but Elbé’s aim isn’t to make fun of the deaf and the situations they find themselves in. The film is based his own personal experience of losing his hearing and subsequently losing connection with people. 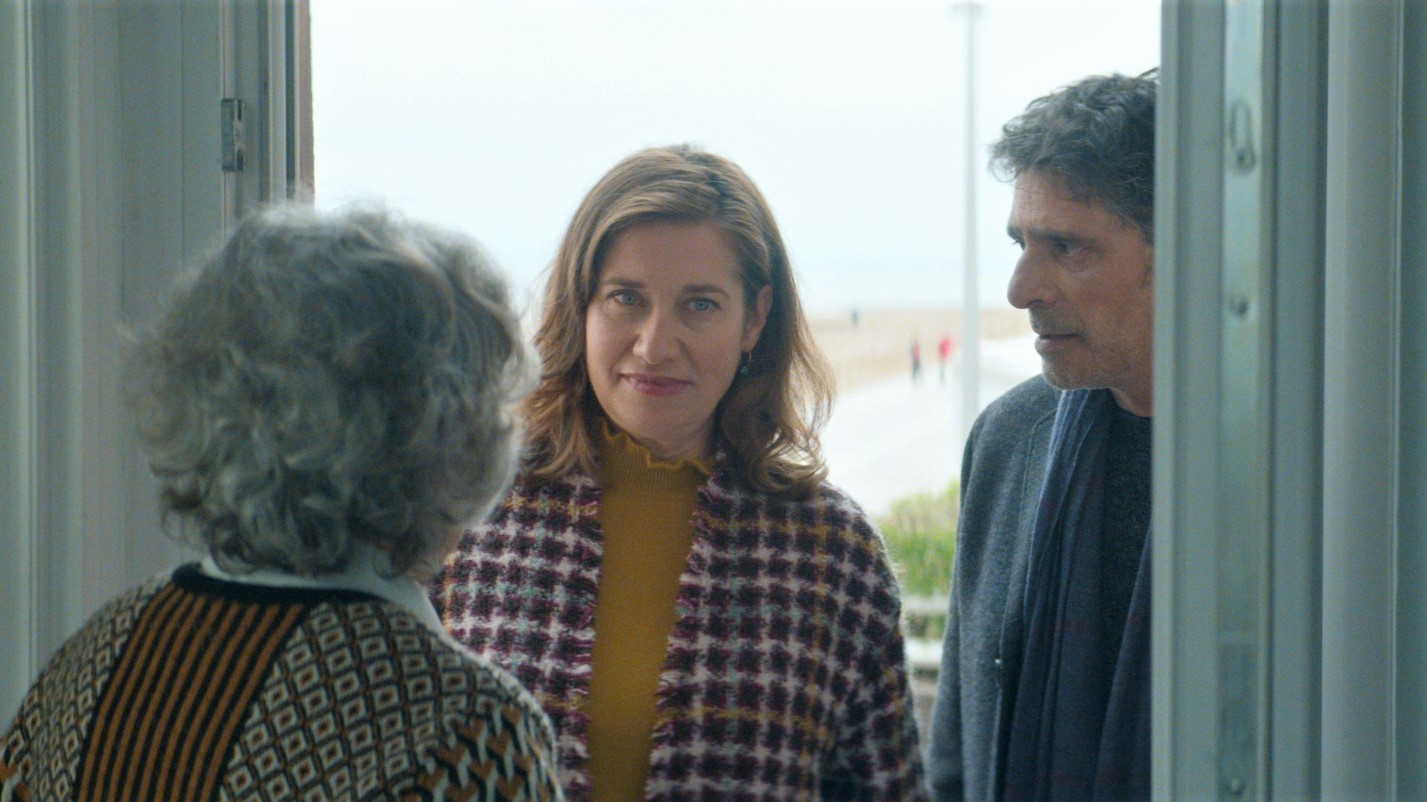 Jeanne (Emmanuelle Devos) and Antoine have to deal with their mother’s dementia.

Things come to the crunch

Hearing aids, it seems, are not necessarily an instant solution. When Antoine finally gets his, he finds the sounds so amplified that they’re unbearable. The most hilarious scene takes place in the staffroom when a colleague starts munching a packet of crisps. It’s torture!

Elbé is a magnetic prescence, Kiberlain is a fabulous as ever  and there is a lovely cameo from Emmanuelle Devos (of Perfumes and Read My Lips fame), who plays Antoine’s sister Jeanne. The siblings’ mother is also losing an important sense – that of memory. Her dementia is reaching the point that she has to be moved out of their childhood home by the seaside.

The home will have to be sold. Or will it? It’s on a trip with her mother and Antoine to the seaside that Violette finds her voice again. Perhaps this is the place where the three of them are meant to be.

Hear Me Out‘s ultimate message is that life is precious. Make the most of the beautiful things it has to offer, with all the senses that we have to appreciate them with. M5R

The highlights of the 2022 French Film Festival