Home Italian Nostalgia can be fatal in Naples
ItalianItalian film

As you’d expect, the film that opened Australia’s 2022 Italian Film Festival, the uproarious comedy Belli Ciao, is one to put on your ‘must see’ list. Another is Nostalgia, which was chosen as the festival preview film for members of the media in Sydney a couple of weeks before IFF22 opened.

Nostalgia comes to Australia fresh from its triumph at the 2022 Nastri d’Argento (“Silver Ribbons) awards, where it won Best Actor, Best Director, Best Screenplay, and Best Supporting Actor. The awards, which date back to 1946, are decided by Italian film critics – the Sindacato Nazionale Giornalisti Cinematografici Italiani, to be precise.

Directed and co-written by Mario Martone, the film stars Pierfrancesco Favino (pictured at top) as Felice Lasco, who is returning to his home town, Naples – Napoli in Italian – after an absence of 40 years. The question is, why did he leave, and why has he come back? And so we delve into the secrets of his murky past.

Nostalgia‘s trailer, unfortunately, shows little of the early scenes, which focus on Felice’s long overdue reunion with his mother, Teresa, played superbly by Aurora Quattrocchi, who will turn 80 next year. (She’s so good that as soon as I got home from the cinema I had to look her up to see what other films she’s been in – it’s an impressive list.)

Teresa’s not exactly living in squalor, but she’s lonely, neglected and has had to sell the grand family home and move into a cheap hovel to survive. The scenes involving her and Felice are some of the most tender child/parents you will ever see. They will resonate particularly with anyone who has had to leave leave home and their homeland in search of a better life, with all the resulting agonies and guilt that you have not been there for your parents when they needed you most. 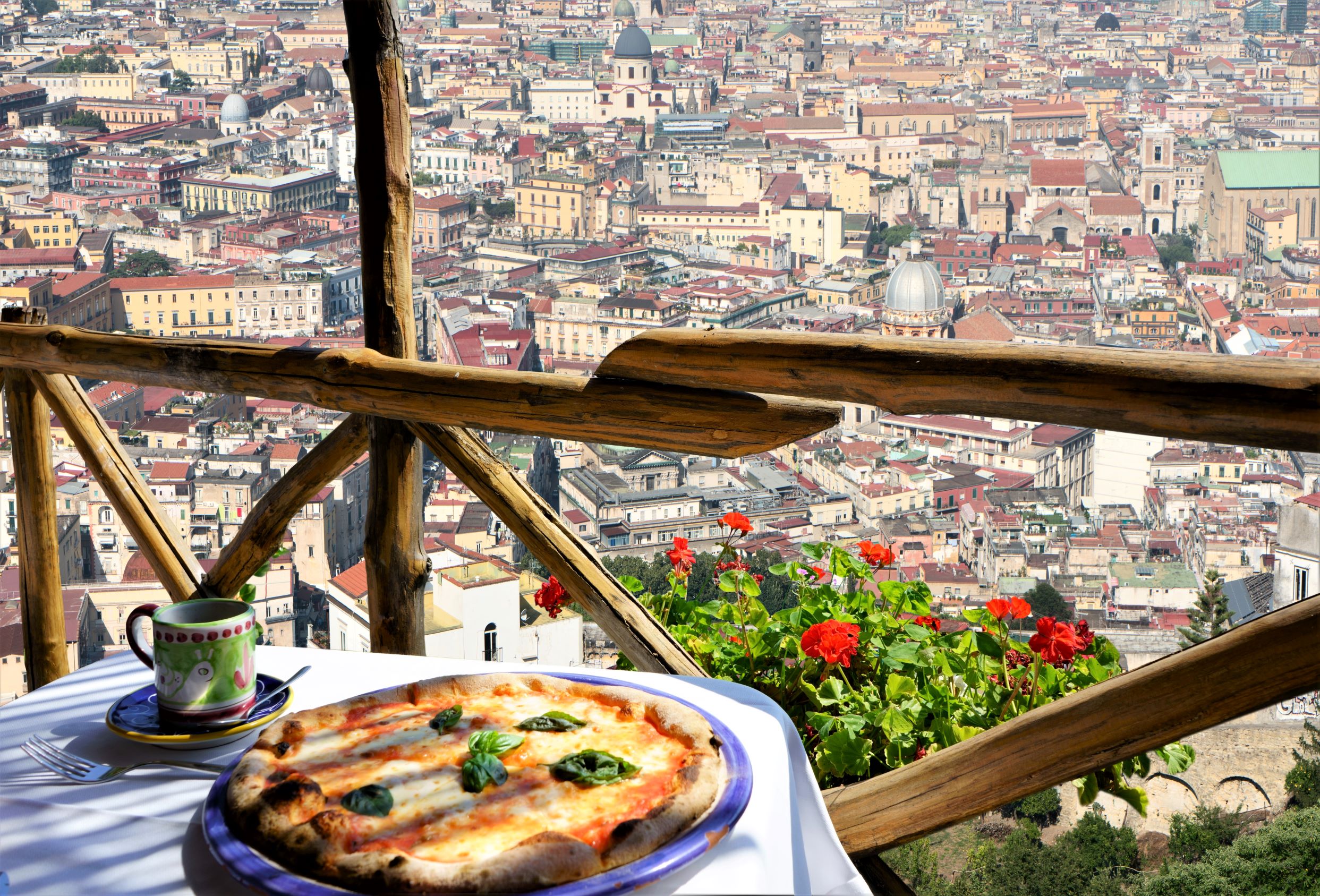 A great place for a pizza.

The person Felice is most interested in seeing again, however, is his childhood friend Oreste (played as an adult by Tommaso Ragno). In the scenes of their youth, their friendship was so strong and affectionate that I wondered if they were gay. The adult Oreste proves elusive however, and as Felice widens his search, rediscovering parts of Naples, his affection for the city grows. Many of the scenes take place in the Rione Sanità neighbourhood.

Parts of the city, which I have never visited, look very interesting. Some scenes took place in an area very similar to the one in the photo above, with railings that look a bit makeshift and flimsy, and great views below. If you recognise which part of town it is, let me know in the comments box below.

Nostalgia, however, is not necessarily a great advert for the city. Rival gangs rule their turf, and it’s dangerous to stray into the wrong place at the long time. A local priest Don Luigi (Francesco Di Leva) takes Felice under his wing. The best thing Felice can do, he says, is to forget the old friendship (“hearts harden in time”) return to North Africa.  Felice soon realises he’s being watched. It’s a sombre, brooding film, very measured in pace, loaded with increasingly sinister undercurrents culminating in a shocking finale.

The 2022 Italian Film Festival has a whole section dedicated to Naples, “the heartbeat of Italian cinema”. M5R