Hats off to The Man In The Hat

Under the night lights in a picturesque part of Marseille’s waterfront, a lone man is dining at an outside table. The front-page headlines on his newspaper are grim: mafia hitmen have been gunning down their rivals in the city. Further down the quay, a Citroën 2CV pulls up under the shadows of an arch. Five thugs get out, open the boot and lift something out. It’s heavy. Good grief – it’s a body wrapped in plastic! Thinking nobody is watching, they toss it into the harbour. Suddenly they spot the diner, our Man In The Hat. His eyes widen in fear, his Adam’s Apple gulps nervously – a witness to their heinous crime, he’s about to become their next victim.

The brief appearance of three nuns gives him time to scramble to his car, a tiny blue Fiat 500. It’s definitely not an ideal escape vehicle, but a 2CV with five burly blokes in it is no racing car either. Nevertheless, the chase begins. But this is arthouse film territory: The Man In The Hat is no The Fast And The Furious. It is a joyride for audiences, though: a jolly, genteel jaunt through the spectacular rural roads of southern France.

A letter to The Man In The Hat

When Irish actor Ciarán Hinds, who plays The Man In The Hat, first got invited to participate by co-writers/directors John-Paul Davidson and Stephen Warbeck, he must have considered himself the luckiest actor on the planet….

Hi Ciaran, hope you’re well. Loved your work in Game of Thrones and Harry Potter And The Deathly Hallows. Would you be interested in working with us on our new film The Man In The Hat? You’ll be the Man! It’s set in France but  you won’t have to speak much French (parlez-vous Français?), there’s hardly any dialogue. No pesky lines to remember! It’s all in the action and facial expressions really. Basically, you’ll have to drive around beautiful French countryside, stopping every now and then to eat in restaurants and quaff wine in picturesque villages (hope you like French wine and cheese!). There will be music festivals and sing-songs – you won’t have to sing yourself, we’ve got some great talent lined up. You’ll meet quirky, interesting characters along the way, maybe even a love interest too, all the while being chased by some men who are out to kill you. But don’t worry, we’ll keep the violence to a minimum. It’s more of a comedy than an action movie. You’ll have picnics in the countryside and will swim in a river or two (relax, no nude scenes! And the water will be sparkling clean.) We’ll be filming in summer so the weather will be gorgeous. It’ll be great fun. Do let us know if you’re keen.
P.S. Can you let us know if you have any food allergies and what size hat you wear? Merci.”

Bonjour mes amis, merci pour le script, c’est tres jolie, count me in! I don’t have any food allergies, happy to eat anything those French chefs can cook up for me! Mon chapeau est grand, peut-être très grand. J’ai une grosse tête! When can we start? 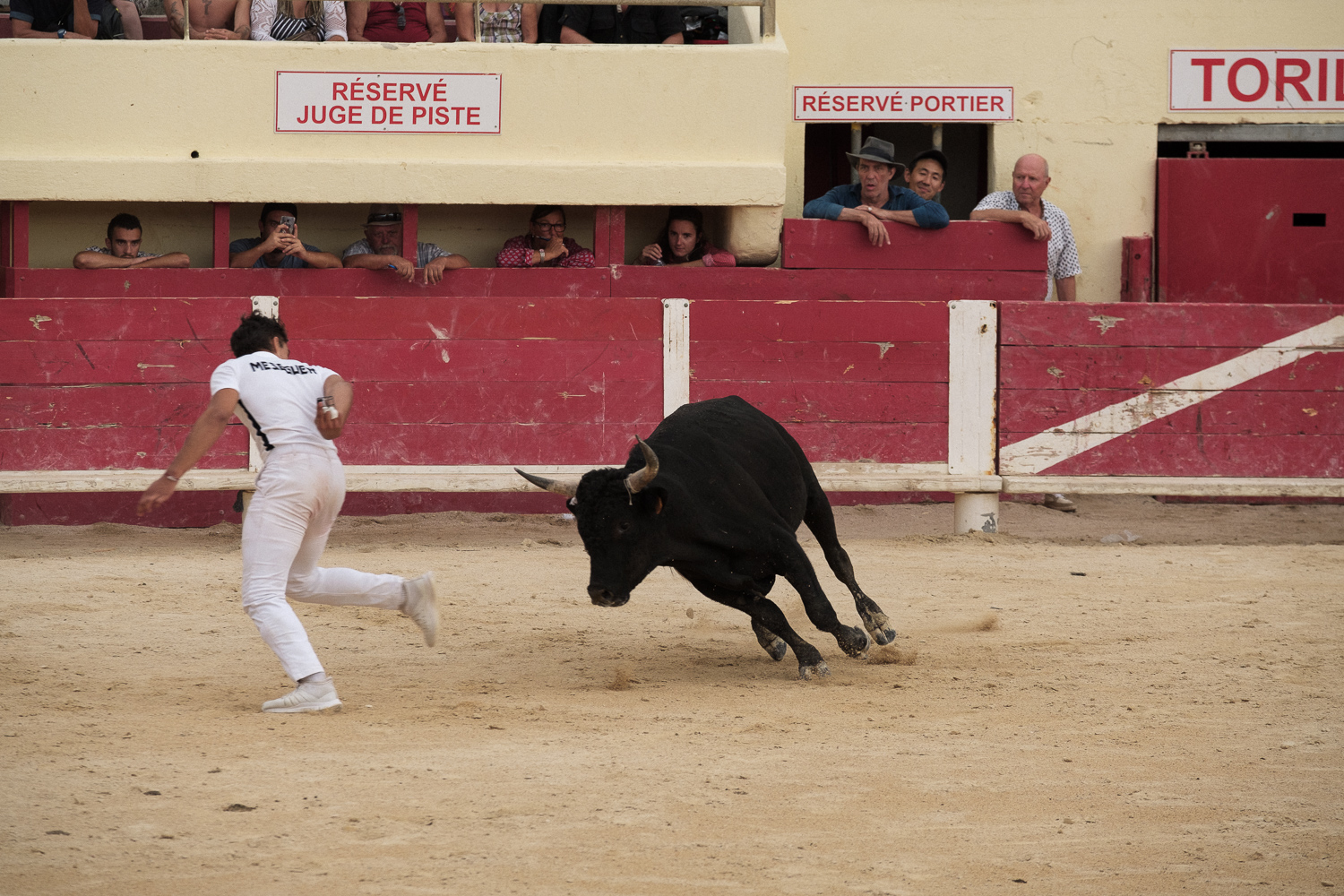 Can you spot The Man In The Hat in the background?

A pleasure to watch

The Man In The Hat is a film unlike any other and is all the more intriguing and enjoyable for it. Every review I’ve read has positive. Ciarán Hinds holds everything together, exuding a gentleness, warmth and sympathy for the people he meets on the way. Despite the paucity of dialogue, the other members of the cast – many of whom appear briefly, disappear and then reappear unexpectedly again – blossom into characters we can fully relate to. The car chase is farcical, but deliberately and enjoyably so. Indeed, the most thrilling and dangerous action occurs in the bull ring. But even there the violence is restrained – there is no stabbing of the bull, no blood spilt. Just hunky men in white running around trying not to get their butts gored. Unfortunately, the hunks don’t reappear in any other scenes.

The scenery is terrific, as you would expect with John-Paul Davidson at the helm – he’s done travel documentaries with Michael Palin and Stephen Fry. This is a film for anyone who hankers after La Belle France. And it’s best watched on a big screen with a glass of wine at hand! M5R

love the review of this film. Definitely want to see this! Merci Bernard