Colombian films have come a long way in recent years, or maybe they have always been good and the world has only recently started to take notice. In 2015 El Abrazo de la Serpiente (Embrace of the Serpent) became the first Colombian film to be nominated for an Oscar, in the Best Foreign Film category. The follow-up to that, Pájaros de verano (Birds of Passage), was equally splendid and now comes Monos, one of two Colombian films doing the cinema circuit in Australia – the other being Litigante.

Monos was Colombia’s official entry for the 92nd Academy Awards held in February 2020 but did not make the final five in the Best International Feature Film (won by South Korea’s Parasite). I went to see it purely to take in the stunning scenery on a big screen (as a small consolation for COVID-19 thwarting a trip to Colombia, Ecuador and Peru I had planned to do as a writer for Time To Wander and other publications). But scenery aside, it is a marvellous film.

The first part of Monos takes place at almost 4000m above sea level in the Parque Nacional Natural Chingaza (Chingaza National Natural Park), east of Bogotá. Director Alejandro Landes says he was “looking for something otherworldly and found these monumental, stone structures – remnants of an abandoned cement mine – in what looked like the top of the world. Their massive scale and simple geometry created such a specific sense of place but impossible to date or place on the map. I knew immediately we had found the film’s opening location. This high mountain plateau is a unique environment—a floating, amorphous wetlands in the sky.”

Then the action moves to the dense jungle on the banks of the Samaná river, south-east of Medellín, “a spectacular place that until recently was completely inaccessible because of the fighting between guerrillas and paramilitaries,” says Landes. Getting to the set was a challenge in itself. “We hiked down a steep jungle canyon to the river with a team of mules who carried our food and gear on their backs. Then, with the help of Colombia’s national kayaking team, we rafted down to a makeshift camp with military tents that had been built for cast and crew by a big family of gold miners that the location manager had befriended and hired.”

It’s not just the spectacular settings that make Monos stand out: it’s one of the most original and enthralling films you’ll come across. The trailer, though, barely hints at all the drama to come…

What does ‘Monos’ mean?

Like English, Spanish has many words using the stem mono– (from the Greek word monos, meaning alone). Examples are monocromo, monólogo, monotonía and monopolizar. But mono has other meanings:

It’s a very clever title: Monos in the film is the code-name for an isolated rebel army unit made up of eight teenagers who are guarding an American hostage, a female doctor. Some are cute and sexual tensions are high; to the hostage they are little brats; they are also nobodies, down at the bottom of the rebel army ranks; and though they belong to a unit they are vulnerable individuals trying to survive in a bleak and violent world, and they will become more alone as their group disintegrates. So it’s also about withdrawal symptoms: the Monos unit is a microcosm for Colombian society itself as it enters a new phase of uneasy peace, following a controversial peace accord between the government and the FARC guerrilla group. 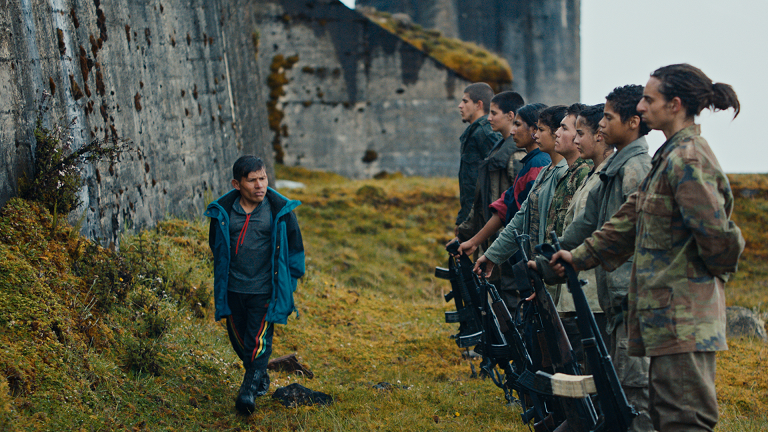 ‘Messenger’, played by Wilson Salazar, stamps his authority on the Monos gang.

A plot that thickens and thickens

The action for the eight teen soldiers in Monos began way before filming started. The eight mostly novice actors were chosen from 30 youngsters who had to go through a mock training camp up in the cold, wet and thin air of the mountain location. There they received acting lessons from Argentinian star Inés Efrón, and military training by Wilson Salazar, who became a child soldier at the age of 11 and deserted the FARC guerrilla group at the age of 24. He so impressed Landes that he was given the role of the higher-ranking “Messenger” in the film. Though short in stature (that’s him on the left above), he is a commanding, sinister presence in the film. He also has one of the most buffed chests you’ll ever see.

A nuptials of sorts takes place on the mountain, but the celebrations go tragically awry, leading to internal tensions. Then the teens, who have mostly been left to their own devices guarding the hostage, are plunged into a skirmish with an unspecified foe, and the Monos have to flee with their hostage to the ‘safety’ of a camp in the jungle down by the river.

Here things become far more sinister.  It’s also where the hostage, played by American actress Julianne Nicholson, has her best chance of escape. As the Monos group fractures – it’s every vulnerable teen for himself or herself, now – the audience is thrust into a deadly series of cat and mouse, in which the tables can turn rapidly and mice become cats and vice versa. It’s gripping. 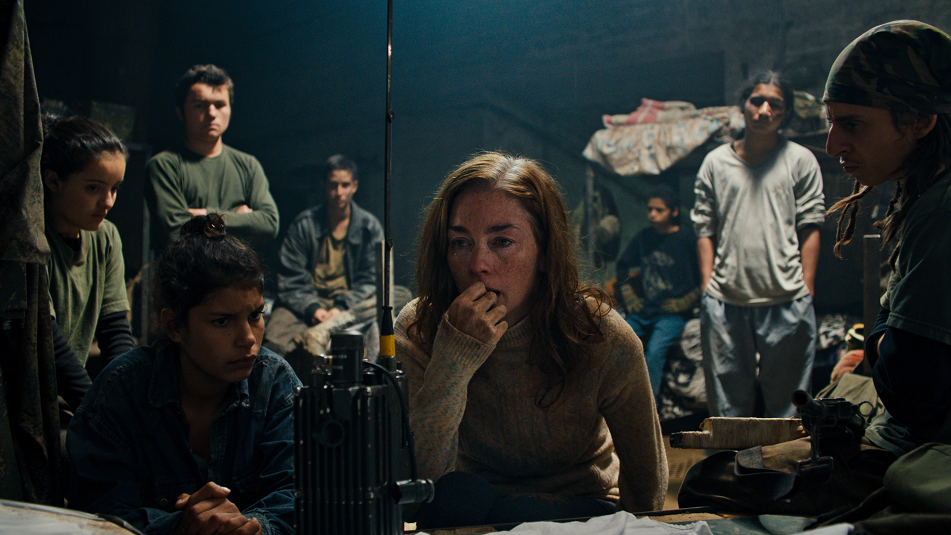 The hostage, played by Julianne Nicholson, tries to negotiate by radio.

Feats of endurance on set

The whole cast of Monos deserves admiration for working in the most testing conditions, particularly by the  Samaná river, where there was torrential rain almost daily. “Everyone was at the outer limits of what they could do physically and intellectually,” Landes says. “I was carried up the canyon on a stretcher one day because I couldn’t even stand-up and our medic was sure I had appendicitis.”

Nicholson did all her own stunts, he says.  These included “facing mad river currents and sliding down the face of a hill during a nocturnal landslide”.  The younger members of the cast  “went through all sorts of challenges and pains, but what I found most incredible was that they – of all people on set – always felt they were making something special.”

Special indeed it is. See it if you can. M5R

Take me under your wing

Great review Bernard, Monos is on my ‘see on the big screen’ list – the scenery looks spectacular!. I loved both Embrace of the Serpent and Birds of Passage.. Thanks you!

Thank you for your positive feedback. I could happily see Monos, Embrace of the Serpent and Birds of Passage again, preferably on the big screen.

Great review, would like to add that in Colombia we also refer to a person that is blonde as “mono (a)”.

Hola Jesús, thanks for the information, I love that usage 🙂