The first new moon of the lunisolar calendar has shone on us, and thus a lunar new year has begun. Last year was the Year of the Rat, now we are in the Year of the Ox. Time to take the bull by the horns, hey?

Now you may have thought that the last year or so was horrible, but since I am a Rat, I don’t want to hear any complaints, okay? Remember, Donald Trump (a Dog) got evicted from the White House in the Year of the Rat. And Joe Biden (a Horse) went galloping in. Oxen and Rats are very compatible, according to the Chinese New Year website, which gives a good account of all things Ox here.

Key vocabulary in My Five Romances 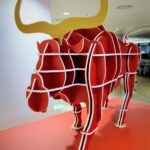 In the countries where these five Romance languages are spoken, probably the ox or boi is most revered in Brazil, particularly in the north and north-east, where it is honoured in festivals that have as much excitement and colour as Carnaval. The most famous ones, held in the last weekend of June, are:

In São Luis the celebrations take place in the streets of the historic city centre, and in the neighbourhoods, while in Parintins there is a grand production in a purpose-built arena. It’s a face-off between two rival folklore teams, Boi Garantido and Boi Caprichoso. It’s a thrilling spectacle.

Here’s a sample of what you might see in Maranhão.

Related vocabulary in My Five Romances