Hello, for a good laugh you have to watch the segment “Duped by Diego” on the ABC’s (that’s the Australian national broadcaster, not the American one) popular weekly program Media Watch, which as the name implies monitors the Australian media for any embarrassing slip-ups.

This segment involves the Today program broadcast on Channel Nine on June 19, the morning after Australia’s football team, the Socceroos, made sure of a place at the World Cup in Brazil in 2014. And, boy, is it embarrassing!  Not only do two of the presenters involved show their ignorance of what language is spoken in Brazil, Ben Fordham then chants out one of the rudest words in Portuguese, thinking it means “amazing effort”.

I will discuss the real meaning further down but below is a transcript taken from the Media Watch website, or you can watch the segment here.  Jonathan Holmes is the presenter of  Media Watch and the rest of the people are the staff of the Today program.

Jonathan Holmes of Media Watch: Boys, you ought to know by now: never contradict Georgie Gardner, she always knows best. Welcome to Media Watch, I’m Jonathan Holmes. It got worse for the Today team. Much worse. And a warning for Portuguese speakers. Block your children’s ears.

Jonathan Holmes of Media Watch: At that moment, Karl Stefanovic was the one who got it right…

Jonathan Holmes of Media Watch: Very wise, Karl. It is Portuguese, not Spanish, and it is very rude indeed. So Ben Fordham was comprehensively hoaxed by Diego. An amazing effort, you might say. Taken in good part by Ben …

Ben Fordham: I apologise on behalf of the entire team, including Karl and Georgie, now…

So, what can we make of all this? First, let’s look at the language. Yes, legal does mean cool, hip, trendy etc in Portuguese. Its more traditional meaning is “legalor lawful“, but in popular Brazilian usage it has also come to mean right, true, correct, OK, cool etc. For example, está legal means it’s all right, it’s OK.

But what does do caralho mean? Well, in Brazilian Portuguese caralho is a vulgarism meaning “cock, prick, dick or fuck! and do caralho can also mean fucking as an adjective. For example, O exame de matemática era uma tortura do caralho (the maths exam was fucking torture). Less vulgar, I should imagine, is pra caralho, which means a great deal, a lot.

A lesson for journalists and public speakers 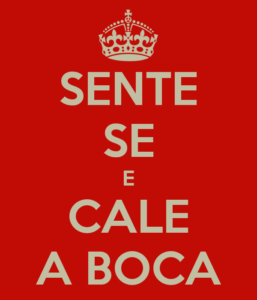 The moral of the story is, if you are journalist and you don’t know what you are talking about, well, either go and do some research or just shut up. Which in Portuguese is Cale a boca! Cale-se! Also Cala a boca, feche a boca (shut your mouth).

The poster to the right means sit down and shut up.

Thank you, Diego, whoever you are, for helping to raise awareness of the Portuguese language in your own peculiar way (I think the Today crew are pretty clear now which language they speak in Brazil) – and for introducing me to a vulgarism, which in Portuguese is um vulgarismo.

Get a grip on masculine and feminine forms in Portuguese

Thats funny. I guess if they can’t even get the language right, they certainly shouldn’t be reading things sent in without checking

The level of ignorance is staggering, if they don;t know what language Brazilians speak, just say ” I don’t know”.

The last time he checked it was Spanish, he said. When did he last check? When Columbus “discovered” America?