For many sentimental reasons, one of my favourite Brazilian pop/rock songs is Até o fim do mundo (Till the end of the world) by the band Gurus. I came across it on my first visit to Brazil in 2003, on a just released compilation CD linked to the popular TV novela (soap opera) Malhação, which ran on Globo TV from 1995 to 2013. The song contains a word that always brings back happy memories: mergulhar.

The scene: my favourite place in Brazil, Paraty, on the splendid Costa Verde (Green Coast) which runs from Rio de Janeiro to Santos. We were doing a day trip on a schooner out in the bay. On board were an old English couple in their late 60s or 70s, and a young guide/chauffeur, whom they had hired on the spur of the moment on their arrival at Sao Paulo airport, plus a lot of 20-something international tourists, mostly from Europe. Most were wearing swimming costumes, eager to catch a tan. 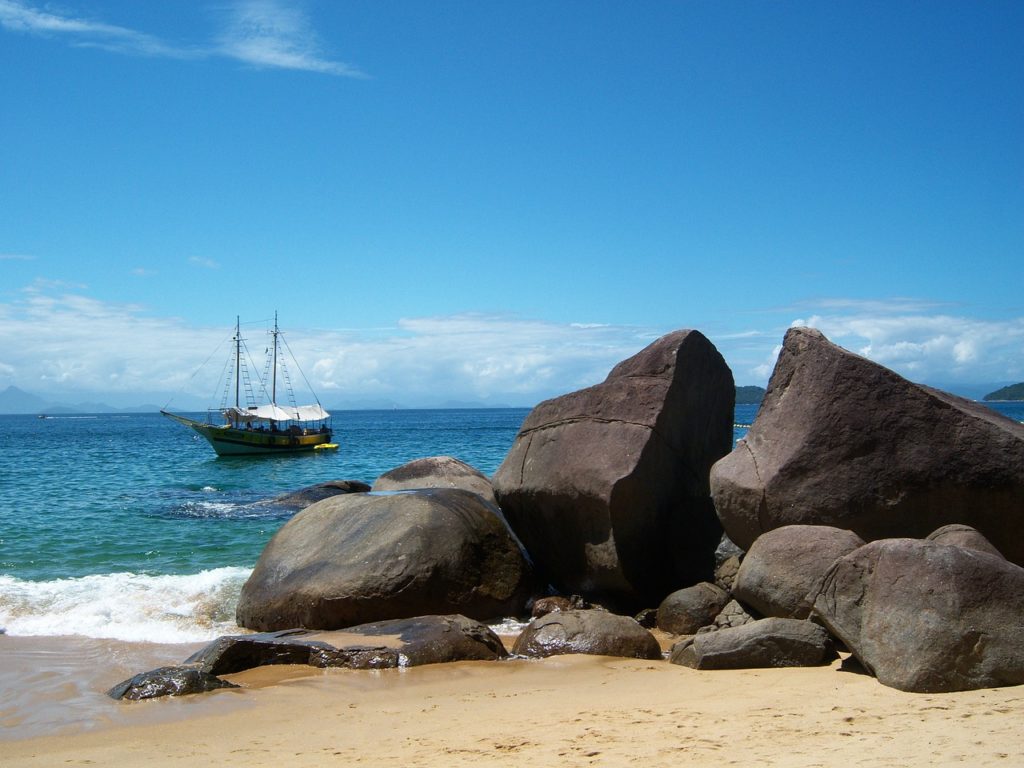 The schooner had dropped anchor; there was an expectant lull. It was hot, I was dying to swim, but nobody was getting in the water. I wondered if sharks were a problem in this part of Brazil.

The young guide was next to me. “Vamos mergulhar?” he said.

I had no idea what he was suggesting we do.

He stepped onto the gangway, overlooking the open sea, and took the plunge. It was the sign we all needed, and we followed suit, jumping like lemmings into the water and losing our inhibitions.

Mergulhar means to dive, dive in, plunge, dip, immerse, etc. See if you can hear it in the song.  I have put the lyrics underneath the video clip.

If you go on holiday to Brazil you should at least know the following vocabulary from the song: ondas = waves; mar = sea; tempestade = storm.

The “-ando” and “-indo” words are present participles. Olhando = seeing; tentando = trying; fugindo = fleeing. Fala and diz are the third person singulars of the verbs falar (to speak) and dizer (to tell). Param is the third person plural of parar = to stop.

You should understand the whole song now!

By the way, to swim is nadar, and the word for shark is tubarão.

Below is a YouTube clip of the band performing the song. It sounds different to the CD version – there are fewer effects in the chorus, for example – but at least you can see the band in action.

sorry about the cold – feel better soon. Maybe that dip in the salt water would do you the world of good …. and you could listen to more from Os Gurus on the way! xx

Thank you… I like your suggested remedies, hope all is well your end