Of all the words I learnt while doing my summer language course in Sibiu in central Romania, this one was by far the most important: îngheţată (ice-cream). Summers in Europe can be surprisingly hot at times, and when you are on the go, an ice-cream cone for 2 or 3 lei (that’s the plural of the local currency, the leu) is a quick refresher.

Îngheţată is a funny word, quite unlike its equivalents in the other major Romance languages:

The Romanian word comes from the verb a îngheţa, meaning to freeze, and îngheţat and îngheţată are the masculine and feminine singular forms of the adjective frozen. A îngheţa de frig means, literally, to freeze of cold; in other words, to freeze to death. 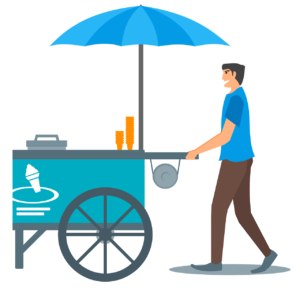 On the streets of Sibiu, there were lots of ice-cream machines in the squares and pedestrian alleyways, staffed by often bored-looking teenagers. A local explained to me that Romanians had only recently discovered these machines, most of which were from Italy.

It seemed, though, that at the time Romania hadn’t yet discovered milkshakes. I’m convinced there’s a fortune to be made selling milkshakes during a hot summer. Just get the îngheţată and add lapte (milk). Sometimes ice-cream cones alone cannot quench a thirst.

Coffee in Portugal is definitely (and generally) good! 🙂

I know, I don’t usually drink milky coffees (prefer espessos or machiatos) but the Portuguese manage somehow to make really good milky ones… I miss the pingados, meia de deites and cafe abatando…. this website brings back good memories
http://www.emmashouseinportugal.com/living-in-portugal/coffee-in-portugal/

Well, bărbaţi = barbarians = men – that seemed just totally intuitive to me, even before I got to your final paragraph 😉

Haha, yes, well, you have a flair for the lingo, and boys will be boys, as they say.