Being Portuguese (sendo Português) or of Portuguese origin is not quite as simple as, say, being French. For starters, there are vast linguistic and personality differences between the Portuguese  Portuguese (sometimes called the European or Continental Portuguese) and their Brazilian counterparts.

The former Portuguese colonies such as Angola, Mozambique and Cape Verde have their own dialects and cultural distinctions too, of course, but apart from a very brief say in Beira when I was nine years old, I have little experience of life there. I do, however, know a lot of Portuguese and Brazilians, so here are minha observações cómicas – my witty observations: 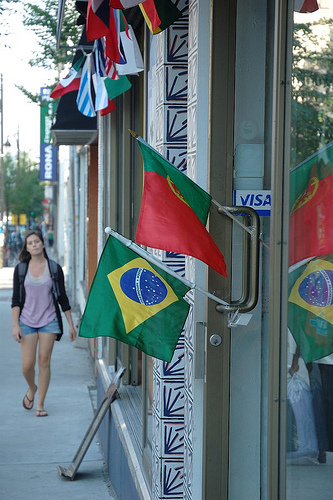 If you are a Portuguese Portuguese man you will convert your whole backyard into a vegetable patch, and grow grapes to make your own wine. When friends come round you be very hospitable as usual, you will give them plenty of food, and a little glass of  your homemade wine for them to sample. Out of politeness they will say, é bom – it’s good – but privately they may very well be thinking é horrível! But you will take them at their word and, thrilled that you have finally found someone who loves your homemade wine, fill up their glass to the brim and you won’t notice the look of horror on their face because now they have got to drink all that stuff.

If, on the other hand, you are Brazilian Portuguese then you certainly won’t be attending your vegetable patch. You’ll be down at the beach showing off your gorgeous body, sipping a coco gelado (chilled coconut water) while watching glorious sunsets and admiring the athletic prowess of those playing football and volleyball on the sand.

Personality-wise, the Continental Portuguese tend to be more reserved than their Spanish neighbours, and even more so compared to Brazilians. Portuguese carnivals tend to be religious, Brazilian ones hedonistic.

‘To be’ in Portuguese

Now to the less exciting grammatical stuff: there are two verbs for to be in Portuguese, – ser and estar – as indeed there are in Spanish.

When to use ser and estar

Basically ser is used for more permanent notions (such as one’s nationality, one’s profession) while estar is for temporary or variable ones. Hence you might ask someone como está? – how are you? How they are today might be different from yesterday.

If you saw me walking down the street, though, you would say Bernardo é bonito (Bernard is handsome) because my handsomeness is so permanent :). But if on the slight chance – and I must stress that it’s a very slight chance – I wasn’t looking so good, say I was having a bad hair moment – you might say Bernardo não está bonito agora (Bernard is not handsome right now), the implication being that this is a mild lapse and his normal handsomeness will return shortly. And you would never, ever say Bernardo é feio, meaning Bernard is ugly (permanence implied), would you now?

love this! You make it quite easy …
I have decided that I am going to try to re-conquer my fear (evident from several abortive attempts & miserable failure in the foreign language department) & try to learn enough to communicate with my Brazilian friend in her native tongue!
Thank you for the inspiration!!!!!

Love your site, check out mine for more portuguese verbs.
http://www.conjugateverb.com/pt

Hello, ola! Well thank you for the link. I know where I will be going to when I have difficulty with Portuguese verbs from now on.