An Australian thing has been named the world’s ugliest creature and I can assure you it wasn’t me. The honours went to the blobfish. Just look at that thing up there. Not only is it ugly, it’s dribbling!

Do you believe in evolution? Having seen the blobfish, the evidence for it is quite compelling. It really does look like that at some stage in the passing of time a blobfish morphed into my favourite classical composer, Anton Bruckner. Take a look… 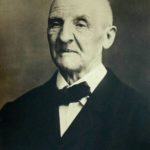 Yes, Anton wasn’t a particularly handsome chappie, and he never managed to convince a woman to marry him, but he composed some truly wonderful music.

Reports of blobfish’s triumph in the ugly pageant made headlines all around the world. Here are some samples (click on the headline to call up the story in each language):

Note how none of these languages seems to have a word for blobfish; that’s because they’ve never seen these ugly creatures before in their lives. They don’t want any blobfish in their territorial waters, their fish tanks or in their lexicon. And who can blame them?

How do you say “ugly” in my five Romances?

And how do you say blob?

Most often, it seems the Romance language equivalent is the word for drop or droplet.

THE GENIUS OF BRUCKNER

Now let’s make it up to Anton Bruckner. How dare anyone compare him to a blobfish! Let’s play the item below as a sign of respect. Conductor Simon Rattle offers his thoughts on what is probably Bruckner’s most popular symphony, and why he is such a majestic composer.

In Defense of the Blobfish (blogs.smithsonianmag.com)

Very funny and creative, despite the not-so-pretty start 😉

Hello, glad you liked it. I wonder if the blobfish is good to eat?

Ha, ha, that really made me laugh out loud. It’s safer to stick to cakes, I’d say.

Absolutely 🙂 Even the wobbly ones taste good.