Mujica v Kirchner: it takes an old bag to spot an old hag

I had a bit of fun this morning telling a Brazilian friend the news that Uruguayan President José Mujica was having to offer “heartfelt apologies” because he had apparently called his Argentinian counterpart, Christina Fernández de Kirchner, an “old hag”, and the Argentinians were not impressed. The pair are pictured right, and he is 18 years older than her! What puffy cheek he has!

What he had been overheard saying, the BBC said, was “This old hag is even worse than the cross-eyed man” (a reference to her late husband and predecessor, Nestor Kirchner, who had what in English is known as “a lazy eye”.) The BBC said Mujica blamed the quip on his “rough language skills”. Perhaps he should start following some language blogs.

My Brazilian friend, who is a bit deaf, initially thought I had said she had been called an “old bag” or “old rag”. But when I explained the word was hag, he didn’t know that word, so I had to look it up in Portuguese for him. A hag is defined in English dictionaries as an ugly old woman or a witch: the English-Portuguese online dictionary.reverso.net had this offering:

I went to BBC Brasil’s version of the story to see if it used the word bruxa. It said he was offering his “sinceras desculpas” and translated the offending remark thus : “Esta velha é pior do que o vesgo.” 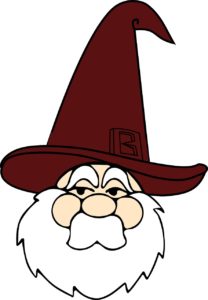 Calling someone a velha is probably not as bad as calling them a bruxa. Velho and velha are the masculine and feminine adjectives for “old” and when used as a noun mean an old man or an old woman, respectively. Vesgo means cross-eyed. But Mujica was born in 1935, Kirchener in 1953. He should take a good look in the mirror.

The original remarks would have been in Spanish so I turned to the BBC’s Spanish site, BBC Mundo, to see what it had to say on the subject: he was offering his “sentidas disculpas“, and the offending remark in Spanish was “Esta vieja es peor que el tuerto“.

I couldn’t find a report on the story on the BBC’s French news site but Le Monde said the Uruguayan president was célèbre pour son franc-parler (well known for his frankness) and translated the line as “Cette bonne femme est pire que le borgne“. (Bonne femme means a good woman but it must have those ageing connotations).

My next search was in the Italian media, a report on la Repubblica TV, where you can watch José make his gaffe. The Italian translation is “La vecchia è peggio del guercio“.

I could not find  anything about it in the Romanian language media, but dictionaries give the following words for hag: babă, hoască,  baborniţă and vrăjitoare. Among the words for old is vechi, which is obviously related to the Italian word above.

The translation of “vieja” as “old hag” is correct. When used as an adjective, “vieja” is indeed “old feminine X” but as a noun, it has distinctly negative connotations and can also mean “washed up” as well as “no longer sexually viable.” This may have been a pot/kettle case as you suggest, but there aren’t really any male equivalents that I can think of. (Crotchety, grumpy, etc. not being nearly as extreme.)

Hello, thanks for your insights, and for supplying the nuances. I think you have made a very interesting point about the lack of male equivalents and I will follow up on that in another post and use your comments there too, if I may. I am enjoying your blog and your observations. I hope you are well, cheers, Bernard