For some perverse reason I am rather enjoying the horse meat scandal in the UK, although there is now even talk that donkeys may have been involved too. And let’s not rule out zebras!

I think part of the reason for my enjoyment is that, despite all our bureaucracies, rules and regulations, despite all the pompous ministers and officials here and there proclaiming that they all adhere to the most stringent standards, it only takes a bit of mischief from a man with a horse (or a donkey) to throw the whole system into chaos. It’s always entertaining to watch the politicians scramble to save their reputations. Everyone is blaming everybody else. In the meantime the old English expression “horses for courses” has been given an entirely new meaning.

I also find it interesting that people in England who think they are eating Irish beef may in fact be eating horse meat from a factory in France or Luxembourg supplied by a possibly dodgy Cypriot trader who sourced his meat from a possibly dodgy abattoir in Romania. Just look at those supply chains! So many middle men! Those poor cows/horses/donkeys do get shunted around. I am surprised the meat is still edible by the time it lands on your plate. Anyway, that’s globalisation for you.

It is strange people will quite happily eat meat from one animal but be repelled by the thought of another.  I have no desire to eat horse meat or dog meat, but I have very briefly sampled camel, emu, and kangaroo meet, and even crocodile meat (in a French restaurant in Zimbabwe) I guess deep down most of us have issues with animal slaughter though we try to keep it out of our minds, and we should try to be more vegetarian. Would it matter so much if Irish potatoes turned out to be Romanian carrots? Je ne crois pas, I don’t believe so. 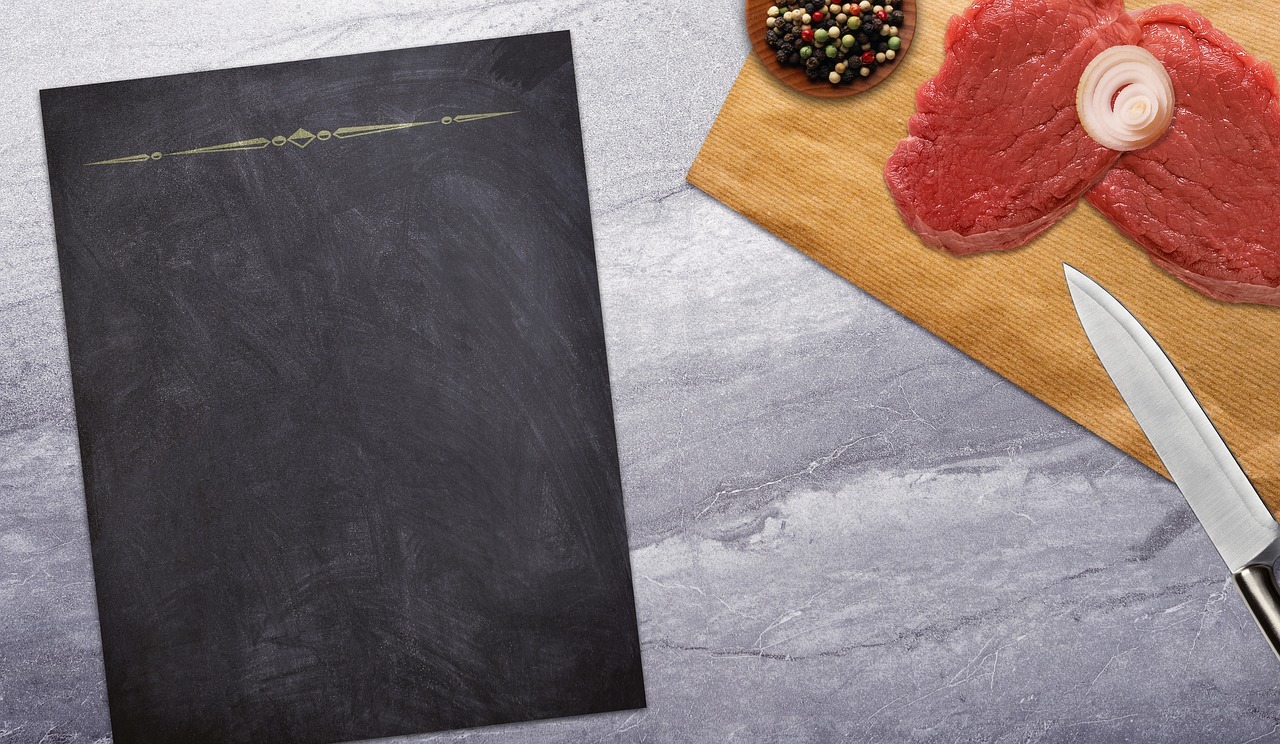 If you go into a restaurant in France, Portugal, Spain, Italy or Romania or wherever they speak my five Romances, I guess you would want to be sure of what you are eating, so let’s look at some edible vocabulary.

The menu is le menu. Meat is viande, a cow is une vache, a horse is un cheval, a donkey is un âne, a camel is un chameau and a kangaroo is un kangourou. Beef is le boeuf, but if you want to say a man is beefy you can say he is costaud, a steak is un bifteck, and gagner son bifteck means to earn one’s living. Horse meat is la viande de cheval, a potato is une pomme de terre (an apple of the earth) and a carrot is une carrotte. An abattoir is un abattoir and to slaughter is abattre, to cook is cuire, but to cook the books (to fake, fix or rig) is truquer. To eat is manger, a big eater is un gros mangeur if it’s a man and une grosse mangeuse if it is a woman. A scandal is un scandale,  it’s scandalous! is c’est scandaleux!, mischief is l’espièglerie, a joke is une blague and to exclaim you’re joking! is sans blague! Other words are une plaisanterie or, if it is a trick, un tour. To fool someone is duper or tromper quelqu’un. A fool is un imbécile, and to play the fool is faire l’imbécile. A joker is un plaisantin.

The menu is o menu or a ementa. Meat is carne (that’s easy to remember, think of words such as carnivore or carnage in English), and the expression nem carne nem peixe (literally, neither meat nor fish) means neither one thing or the other. A cow is uma vaca, a horse is um cavalo, a donkey is um burro, and to be burro como uma porta is to be very stupid (literally, stupid as a door). Ir de cavalo para burro means to be worse off or go into a poorer situation (from a horse to a donkey). A camel is um camelo and a kangaroo is um canguru. Beef is carne de vaca,  a steak is um bife (in Portuguese-speaking snack bars you can ask for a bifana, which is a steak sandwich or roll, usually very tasty). Estar feito ao bife means to be in a difficult situation. Horse meat is carne de cavalo, a potato is uma batata and a carrot is uma cenoura. An abattoir is um matadouro (matar means to kill, and of course it is related to the word matador) and to slaughter is abater, to cook is cozinhar, and to eat is comer. A scandal is um escândalo, it’s scandalous! is é escandaloso, mischief is o traquinagem or a travessura, a joke is uma piada or uma brincadeira, and to fool someone is enganar alguém. A fool is um tolo and a joker is um brincalhão.

A menu is un menú. Meat is la carne, a cow is una vaca, a horse is un caballo, a donkey is un burro, a camel is un camello and a kangaroo is un canguro. Beef is carne de vaca, a steak is un filete or un bistec, horse meat is carne de caballo, a potato is una patata and a carrot is una zanahoria. An abattoir is un matadero and slaughter as a verb is matar but as a noun it is matanza, to cook is cocinar, and to eat is comer. A scandal is un escándalo, it’s scandalous! is es escandaloso! Mischief is travesuras or diabluras (both plural), a joke or funny story is un chiste (think of jest in English) while a practical joke is una broma and to fool someone is engañar a alguien. A fool is un tonto or una tonta, while tonto also means foolish. A joker is un or una bromista.

A menu is un menù. Meat is also carne, a cow is una mucca or una vacca, a horse is un cavallo, a donkey is un asino or un somaro, a camel is un cammello and a kangaroo is un canguro. Beef is carne di manzo or carne di mucca (manzo is a steer) a steak is una bistecca, horse meat is carne di cavallo, a potato is una patata and a carrot is una carota. An abattoir is un mattatoio and to slaughter is macellare, to cook is cucinare or cuocere, and to eat is mangiare. A scandal is uno scandalo, it’s scandalous! is è scandaloso!, mischief is una birichinata or (in the sense of naughtiness) birichineria, a joke is uno scherzo, if it is a funny story it isuna barzelletta. To fool someone is ingannare. A fool is uno sciocco or una sciocca. A joker is un jolly.

A menu is un meniu. Meat is carne, a cow is o vacă, a horse is un cal, a donkey is un măgar, a camel is o cămilă and a kangaroo is un cangur. Beef is carne de vacă, a steak or roast is o friptura, horse meat is carne de cal, a potato is un cartof and a carrot is un morcov. An abattoir is un abator and to slaughter is sacrificare or măcelar (butcher), to cook is a găti, and to eat is a mânca. A scandal is un scandal, it’s scandalous! is e scandalos!, a joke is o glumă and to joke is a glumi. A fool is un neghiob which can be used as an adjective to mean foolish, and to fool is a păcăli.  to fool someone isa păcăli pe cineva. A fool is un prost and a joker is un joker or un clovn (clown).

Well, that is a lot to digest. I’m sure in a future post we’ll be discussing pork meat, lamb chop and chicken nugget scandals. In the meantime enjoy watching politicians having to eat their words…. engolir suas palavras in Portuguese, engolir meaning to swallow.

Great post, I found it very enlightening 🙂 I also like the way you connect the subject to the language stuff. You inspired me to go back to my Romance languages, which I have neglected lately. Probably I’ll write about them after finishing the Arabic series. By the way, thank you for following my blog! After reading your posts, I decided to follow yours as well. Keep up the good work!
Damyan

Hi Damyan, thanks for your feedback and thanks for following! I am glad you found it enlightening and inspiring…. I will keep an eye on your Arabic series too as I went to Jordan last year for a work-related trip and the language grew on me … it is very expressive and musical. How many Romance languages do you know? I am guessing Romanian would be one…. Good luck with your studies too, cheers, Bernard

Regarding Italian:
A menu is “un menú” (with written accent).
A cow can be “una mucca” (not “un mucca”) or “una vacca”.
A donkey is “un asino”, that ‘s ok; but it can also be “un somaro” and various other dialect names.
The word “manzo” properly means a steer (or bullock); while beef can be “carne di manzo” or “carne di mucca”.
An abattoir is “un mattatoio”; not “un matatoio”.
A mischief could be “una birichinata”. But “birinchineria” is a mess.
All the rest is ok.

Hello, thanks for popping by and taking the time to do corrections, which I have incorporated in the post. I really appreciate the feedback. Unfortunately I am to blame for some of the mistakes, like not putting the two Ts in mattatoio. I remember this post took me almost all day Saturday to compile and by the end of it I had a splitting headache! I am also beginning to realise that while pocket dictionaries are convenient to carry around, if you want a true picture of a language you really have to go for the big, heavy dictionaries, to see the nuances of the various words, and to get all the related expressions (which I really find interesting). I am using the Collins pocket Italian dictionary, I like it because the fonts and use of colour make it easy to read, it has interesting observations on the Italian language in the middle, and verb conjugations at the back. But even though it is quite big at more than 600 pages, under “mischief” in the English section it just gives “birichineria (naughtiness)” – I originally typed it incorrectly as birinchineria – while in the Italian section it has “birichino” for “mischievous” or “rascal” but does not give any other “birichi…” words. Incidentally the dictionary has the accent on menu pointing in the opposite direction. Thanks once again, and please keep a critical eye on my forthcoming Italian posts. All the best, Bernard