I bumped into a friend in at the 2022 French Film Festival in Sydney. “What have you seen?” I asked. “The comedies,” she said, grinning. “The French do comedies differently.” It’s true. There’s nothing like a clever, good-natured French comedy. Here are the best comedies at the 2022 Alliance Francaise French Film Festival in Australia; look out for them on foreign-language streaming services.

The best ‘feel good’ film of the festival, and the one that evoked more laughs from the audience than any other I saw. The title’s not very inspiring but the movie certainly is. Popular French comedian Kev Adams stars as Milann, a hothead who’s on probation working in une maison de retraite (a retirement home). It’s a job he loathes. Cue some toilet humour that makes him squirm: dirty bed sheets to be cleaned and having to hold an old man’s willy while he pees.

Milann is an orphan who’s had little experience dealing with elders, but gradually his animosity subsides and he starts to see them as humans rather than nuisances. The retirees he befriends (a terrific ensemble including Gérard Depardieu, Jean-Luc Bideau, Firmine Richard and Marthe Villalonga) take him under their wings and turn him into a calmer, wiser man. 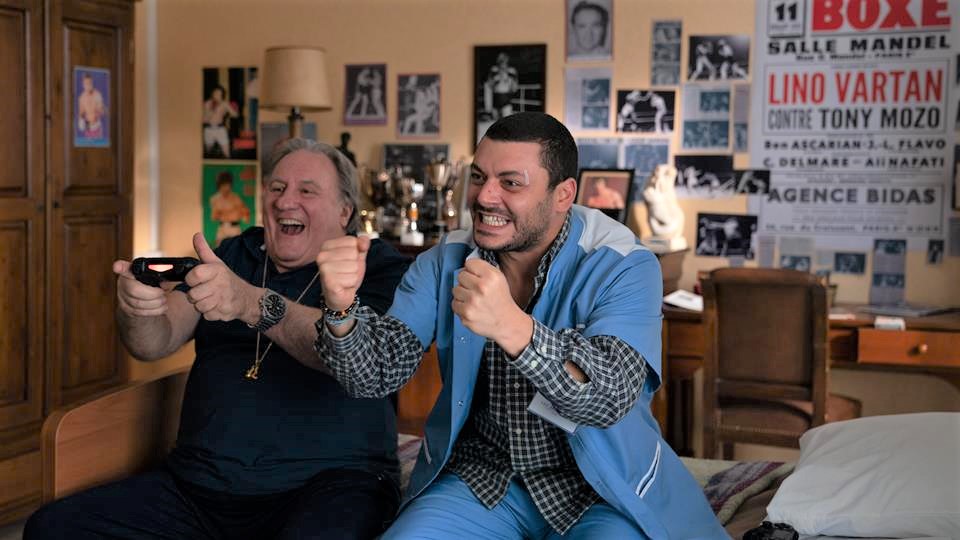 Gérard Depardieu and Kev Adams’ characters start to bond in the retirement home.

But something sinister is going on in the retirement home: elder abuse. None of the residents is allowed out, and the director Monsieur Ferrand (Antoine Duléry) refuses to let Milann organise an outing. There is only one way to solve things. Helped by co-carers Marion (Manda Touré) and the hilariously camp Alban (played by Jarry), Milann leads the entire entourage of ailing residents on a mass breakout to another abode – the orphanage where he grew up.

Soon he is back in the field, though. A young agent OSS 1001 (Pierre Niney) has gone missing in action in an unnamed African country (the filming took place in Kenya and features some gorgeous scenery). OSS 117 has to find OSS 1001, who has failed to turn up for a meeting with the country’s president, Koudjo Sangawe Bamba. The president is a French puppet ruler, and OSS 117 has to protect him from possible coup d’état.

OSS 117 is no charming James Bond. His character is described on Wikipedia as “a dim-witted and politically incorrect oaf … As a comical character, he often creates awkward social situations due to his colonial ideology, staunch French patriotism, chauvinism and machismo”. So in Africa he’s bound to put his foot in it. But the cringeworthy moments are truly outnumbered by those that make you laugh out loud. Everyone my age will relate to the troubles OSS 117 has with his early 1980s ‘laptop’ computer, which came in a huge crate.

OSS 117 (Jean Dujardin) flirts with danger when he dances with the president’s wife (Fatou N’Diaye).

OSS 117 is also a womaniser, though in this film he has trouble ‘rising to the occasion’ when on bedroom duty. And when he does get an erection waking up alone in bed one morning, it’s not what he thinks! In contrast, OSS 1001, who dresses flamboyantly and embraces his feminine side, is a hit with the ladies, which makes OSS 117 jealous and resentful. The skinny Niney has great fun in his role. In one of the funniest scenes, he returns from a sexual conquest and glugs an enormous bottle of water in front of OSS 117, like a triumphant sweaty world-class sexual athlete showing off at the gym. French actress Natacha Lindinger and Senegalese-born Fatou N’Diaye (above, with Dujardin) star as the love interests.

The film’s original title Alerte Rouge En Afrique Noire means Red Alert In Black Africa (as opposed to Arab Africa, I guess). The Red bit is also an illusion to the threat of communism – communist-backed rebels are plotting a coup d’état. Interestingly, the Canadian title chosen for the film was OSS 117: Bons Baisers d’Afrique – which means big kisses from Africa.

This is Dujardin’s third film in the current series of OSS 117 (there have been heaps more, based on more than 200 books!).  At times it can be tempting to think that playing a buffoon is a role any B-grade actor could do. But let’s not forget that in 2011 Dujardin became the first Frenchman ever to win an Oscar for Best Actor in a Leading Role for his part in the silent movie The Artist, and he picked up the equivalent award at the Golden Globes and BAFTAs too. 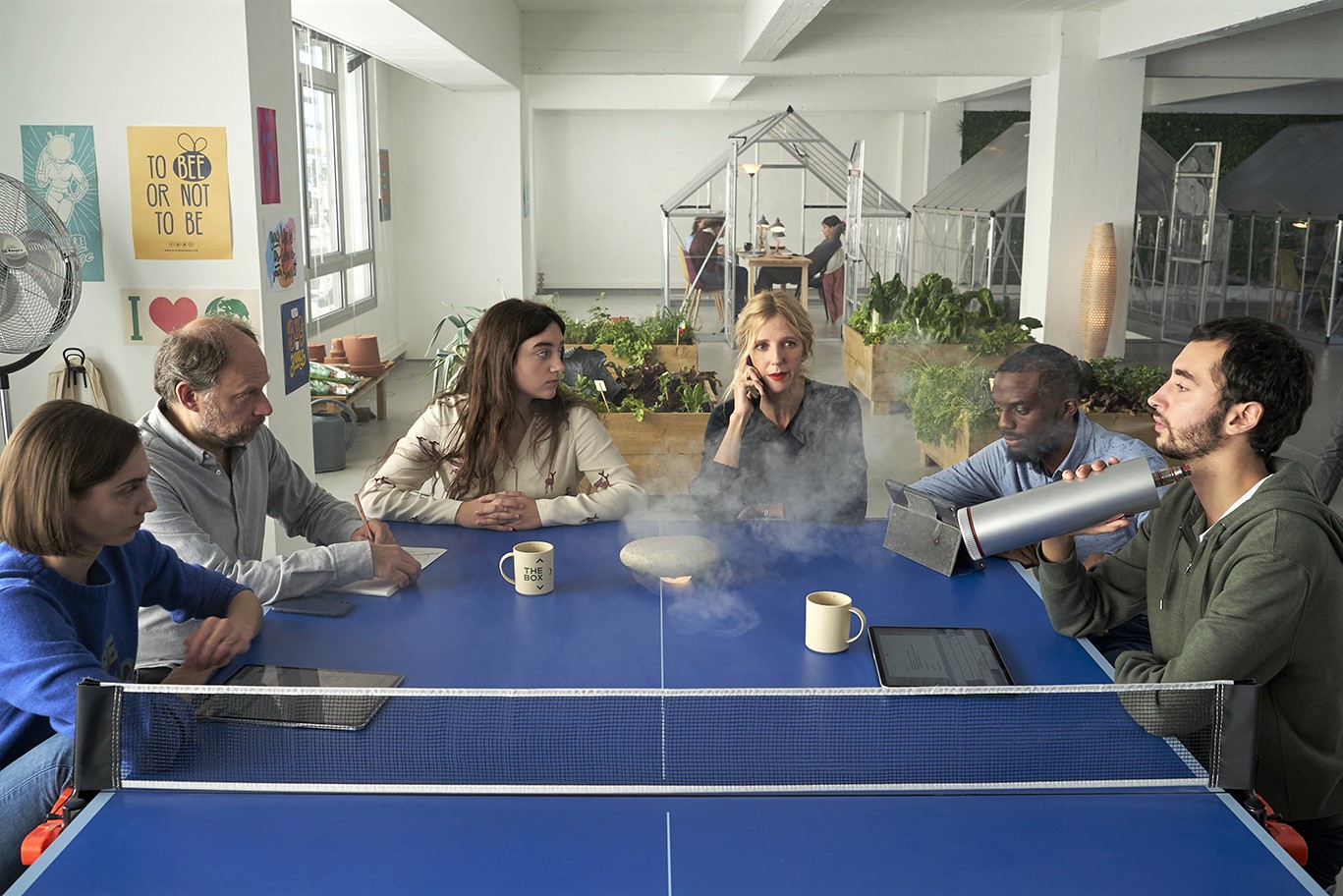 This is an entertaining satire on the demands of the modern world (think disobedient driverless cars) and the absurdities of working for a hip start-up company. It culminates in a company’s public relations triumph: a gladiatorial ‘Game of Drones’ contest in a non-descript factory town. Denis Podalydès, his brother Bruno and Sandrine Kiberlain are superb in the leading roles. The 2 Alfreds of the French title are a pair of toy monkeys.
See French Tech is a laughing stock 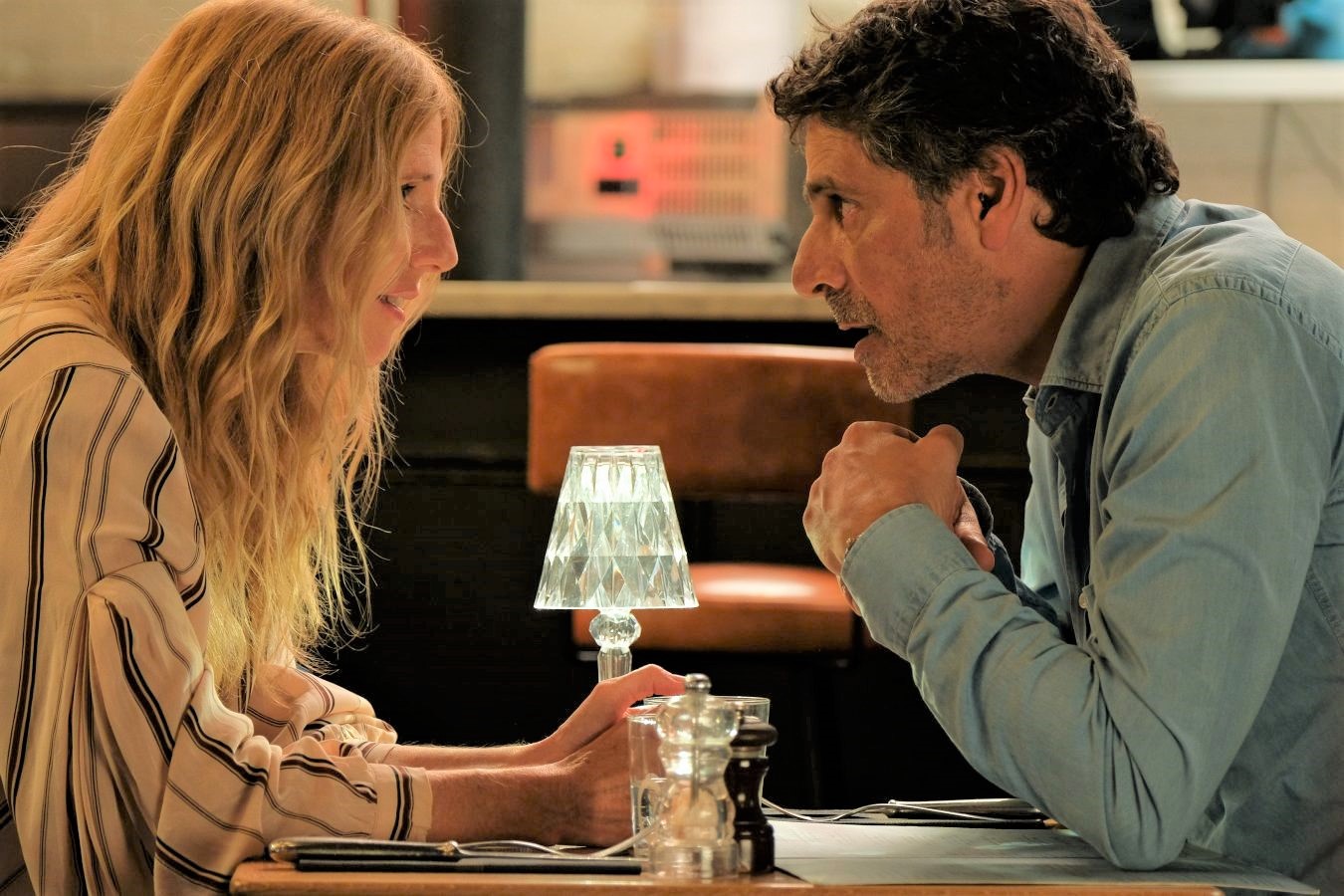 4) HEAR ME OUT (ON EST FAIT POUR S’ENTENDRE)

This is the movie for anyone getting hard of hearing as middle or old age approaches – or for those who must put up with their misinterpretations. The muddles make for great comic material, but writer, director and lead actor Pascal Elbé’s is sympathetic rather than mocking – the film is based on his own experiences of losing his hearing. Some of the funniest scenes come as his character finally starts using his hearing aids and subsequently hears too much. Sandrine Kiberlain (above, with Elbé) also stars in this one.

See Hear Me Out – a film for those who can’t believe their ears. M5R