The absurdities of working life have always been great material for comedy, and the office mockumentary film French Tech is an entertaining addition to the genre. Featuring hazardous gadgets galore, it taps nicely into our high-tech times.

Part of the 2022 French Film Festival in Australia (its French title is Les 2 Alfred, sometimes written with Deux instead of 2, but more on that later) it has generous helpings of Gallic humour. Like the time when high-ranking employee Séverine (Sandrine Kiberlain in fine form) has to try to recreate a mosquito bite on her nose to use facial recognition on a driverless car that stubbornly won’t open its doors. (She had a bite there when she took her original facial photo.)

There are many other amusing scenes where technology causes great embarrassment, but the comedy is interspersed with poignant and tender moments and serious issues. It’s an endearing look at the struggle with work-life balance, and how humans can be cogs in an unforgiving machine.

A fish out of water

The set-up for the story is somewhat implausible but you easily go along with it. Fifty-something Alexandre (Denis Podalydès, second from left in the top photo) is a loser. His wife has left him, and he is unemployed, broke and struggling to raise their two young kids.  But he’s scored a job interview with a high-tech company, The Box, and hopes that a spell of success and stability will help him win his wife back. Wishful thinking, surely!

The moment he enters The Box’s funky office premises, however, he’s obviously a fish out of water. His interview with the company founder, Aymeric (played by French celebrity magician Yann Frischa) is a disaster. But nothing is predictable in this film, and he’s hired on the spot. He has to handle the “reacting process”, whatever that is.

There’s a major problem, though. The Box’s dogma is ‘Got kids? Get out!’ Employees can’t have children and must be on call 24/7. Alexandre assures Aymeric he has no offspring, and his survival is instantly made harder by his having to hide the fact that he has two young children. Luckily the vomit on his suit’s shoulder-pad looks like bird shit to his supervisor, Séverine.

Help comes from an unexpected source. At his children’s day-care centre, Alexandre befriends Arcimboldo (played by Denis Podalydès’ real-life brother Bruno Podalydès, who wrote the script and directed the film).  Arcimboldo needs somewhere to stay, so Alexandre takes him in as a lodger. In return Arcimboldo has to pretend to be the kids’ father when needed. And so the fun begins…

Drones are particularly symbolic. The project that Alexandre and Séverine are assigned is to create an event that will put a town – whose only asset of possible interest is a drone factory – on the map. They come up with ‘The Game of Drones’, a contest in which participants’ drones fly around in an aerial wrestling ring, smashing and crashing into one another until the last drone is left flying.

It’s a metaphor for the gig economy. Throughout the film, blue drones fly all over the place on deliveries until they clatter to the pavements, their batteries running out. One of Arcimboldo’s many jobs is to collect them, take them home and recharge them so that their fit for duty the next day. Arcimboldo’s and his rival collectors, too, resort to violence as they wrestle and engage in tugs of war over a drone. They have quotas to meet, and each drone is money.

And what are Les 2 Alfred? Two toy monkeys that Alexandre’s children need with them all the time, for comfort and assurance in this crazy world. 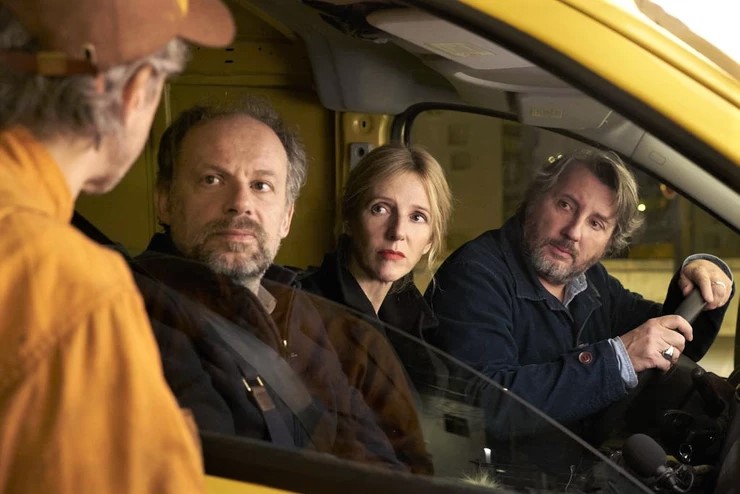 French Tech is a clever, witty film with a lot of layers. Each time I watch the trailer I find something new to chuckle at. The acting of the Podalydès brothers and Sandrine Kiberlain is superb. Just watch Denis Podalydès’ eyes and hand gestures in the trailer – they speak volumes. Look at how many films and TV movies he has appeared in – more than 120! – and his extensive work in the theatre.  Kiberlain has a CV to match and a great knack for being amusing and very likeable even when her character is angry and irritated.

French Tech is definitely one to see at the 2022 Alliance Française French Film Festival or on streaming services. M5R