The French consistently make great feel-good films in which jaded, disillusioned adults are lumped together reluctantly with cynical youths – often on the verge of delinquency – but then magic happens. The mutual hostility evaporates. Disdain turns into respect. They start to gel, inspire one another, acquire a sense of purpose. Friendships form. The youngsters blossom, the elderly rediscover their joie de vivre … happy days are here, there and everywhere again!

The magic rubs off on the audience: we leave the cinema feeling more upbeat, our faith in humanity restored. (Okay, so you might be watching at home but the sentence ‘ we get up off the sofa and go boil the kettle feeling more upbeat…’ doesn’t have the same buoyancy, does it?)

Australia’s annual French Film Festival always has a good sprinkling of uplifting films of this genre, and the 2022 festival was no exception. Among those I really enjoyed were Maison De Retraite/The Villa (which will be in Australian cinemas from July 7) and Mes Frères et Moi (La Traviata, My Brothers and I).

A fantastic example – one that I missed at the festival but have just seen in the cinema – is La Brigade (The Kitchen Brigade). Check out the trailer.

Whether they’ve arrived legally is still being investigated, but they’ve come to France in search of a better life. Homesick, lonely and miserable – “I never thought life here would be so hard,” one says – they’ve slumped into sullen inertia and depression. Cathy’s first meal is a disaster. It’s all about pretentious made-for-television presentation, the portions are minute and it arrives on the table more than an hour late! 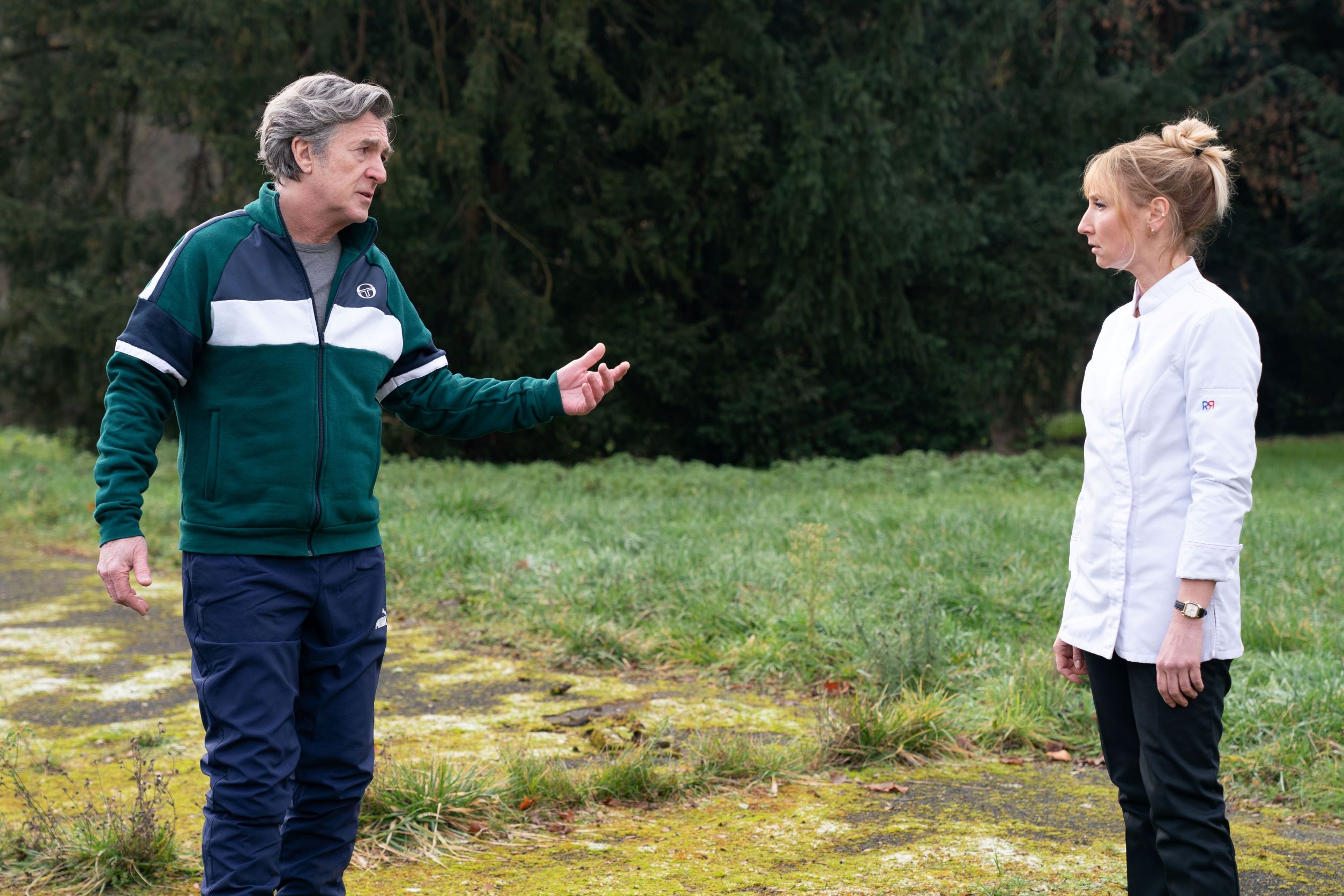 “They’re boys – they want quantity and to be fed on time!” the exasperated but kindly hostel director Lorenzo (François Cluzet) says, reminding her that his food budget is eight euros per day per boy. The hostel’s not the place for Michelin restaurant star food!

One person trying feed 70 people is too hard, though, so Lorenzo suggests she gets the boys to help. Initially it doesn’t work – some of the boys resent taking orders from a woman, but Cathy soon gets them on side. The main problem is they have no idea how to chop and peel vegetables. And so begins their great culinary education. 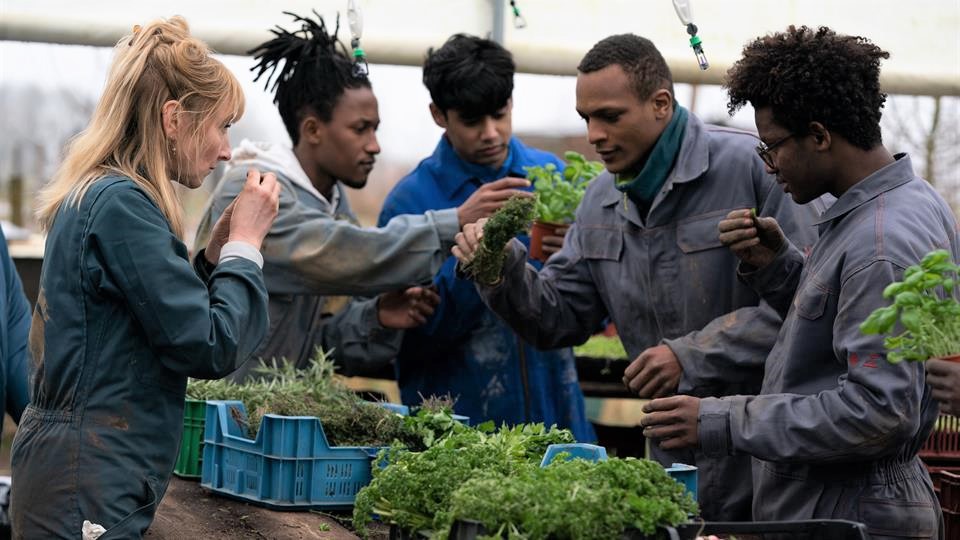 Herbivores in the making in The Kitchen Brigade.

Director Louis-Julien Petit says he got the idea for the film after he met documentary filmmaker Sophie Bensadoun, who told him about the Claude Pompidou Foundation, a charity which takes in undocumented migrant youngsters and teaches them culinary skills.  “I found such touching, tender relationships between the displaced teenagers and their teacher – a colourful, inspiring character – that I was moved to write this film script,” he says.  “I went off to learn more about the lives of this group of young migrants, and their day-to-day reality. I observed them working in the kitchen, I stayed in their hostel, took classes and played football with them.

For Cathy, it’s a lesson in how to engage and get the most out of her pupils. “In this film, I want to talk about learning, teaching, success and self-esteem, while at the same time exploring the challenges of integration, its pitfalls and the risks faced by these young people inside and outside the classroom,” says Petit, whose name might not be recognisable to most cinemagoers, but he has worked as an assistant director to many well-known directors in France and in Hollywood.

The Kitchen Brigade is certainly an inspiration for anyone who has a teaching background. It’s been a while since I’ve stood in front of a classroom, but I’ll remember this film next time I do. 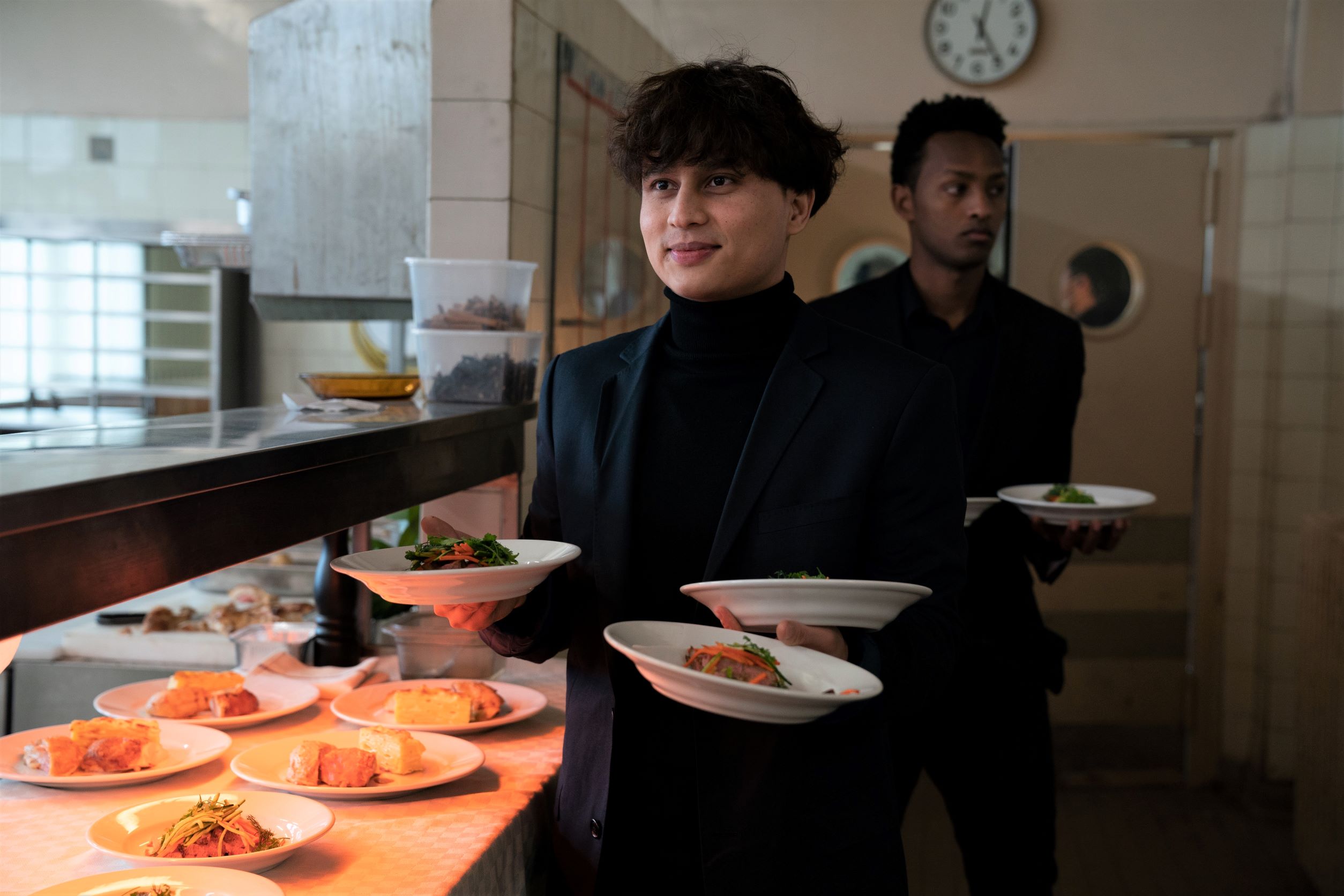 Grub’s up in the hostel, where the kids show off their newly acquired skills.

The Kitchen Brigade could have had fluffy, syrupy ending, but director Louis-Julien Petit and his co-script writers wisely push it into an intriguing, sombre direction.  The immigration authorities suspect that some members of La Brigade have lied about their age and they have to undergo bone testing. Anyone found to be over 18 will be deported. The cameraderie in the kitchen turns into nervous claustrophobia in hospital scanning machines. Futures are at stake.

Cathy, in the meantime, enters a MasterChef-style TV contest called, very blandly, The Cook. She makes it to the grand final, where the three contestants have to style up a pop-up restaurant and a menu to match. We’re thrust into the nail-biting drama of live television, and of course, we want her to win. What she does next, though, is totally unexpected. It’s a magnificent and very touching finale. 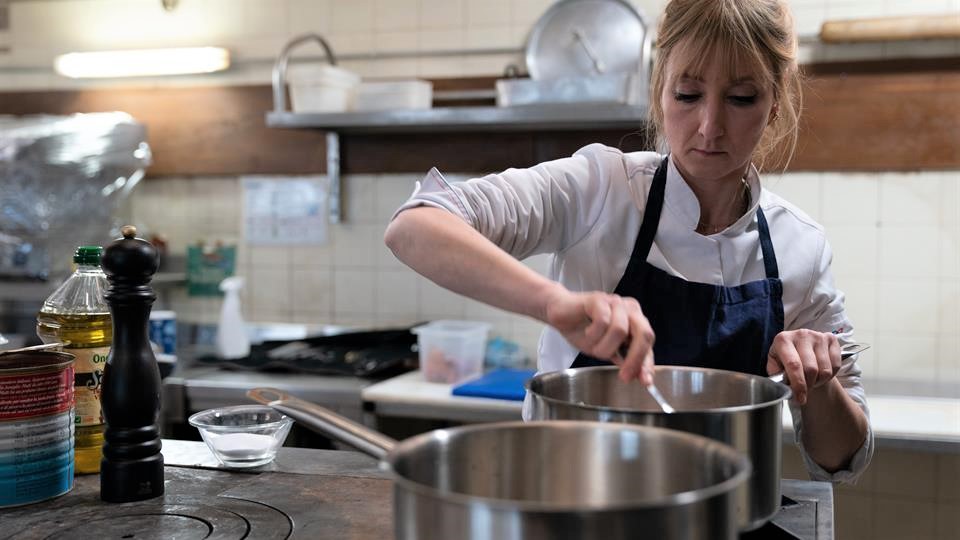 Cathy (Audrey Lamy) rolls up her sleeves in the hostel’s kitchen.

The Kitchen Brigade is a sobering reminder that, whatever the politics of national security and international borders, refugees and illegal immigrants are humans, and often they’re fleeing horrendous poverty or brutality in their homeland. My viewing of the film coincided with the news that at least 23 migrants had been killed and dozens more injured in a stampede of people trying to cross from Morocco into the Spanish North African enclave of Melilla. The Kitchen Brigade can only briefly touch on what brought the youths to France and the hostel. But if you had to script it, you could imagine their stories would be similar to those in the Moroccan stampede.

In the newspapers and on television, these desperate people are faceless, numbers, statistics. They are political ‘nobodies’ at the bottom of the food chain, and all too rarely pitied. Worse, often they’re perceived as a threat, used by callous politicians in their target countries to whip up fear and loathing. “Yikes! The Barbarians at the gates!” 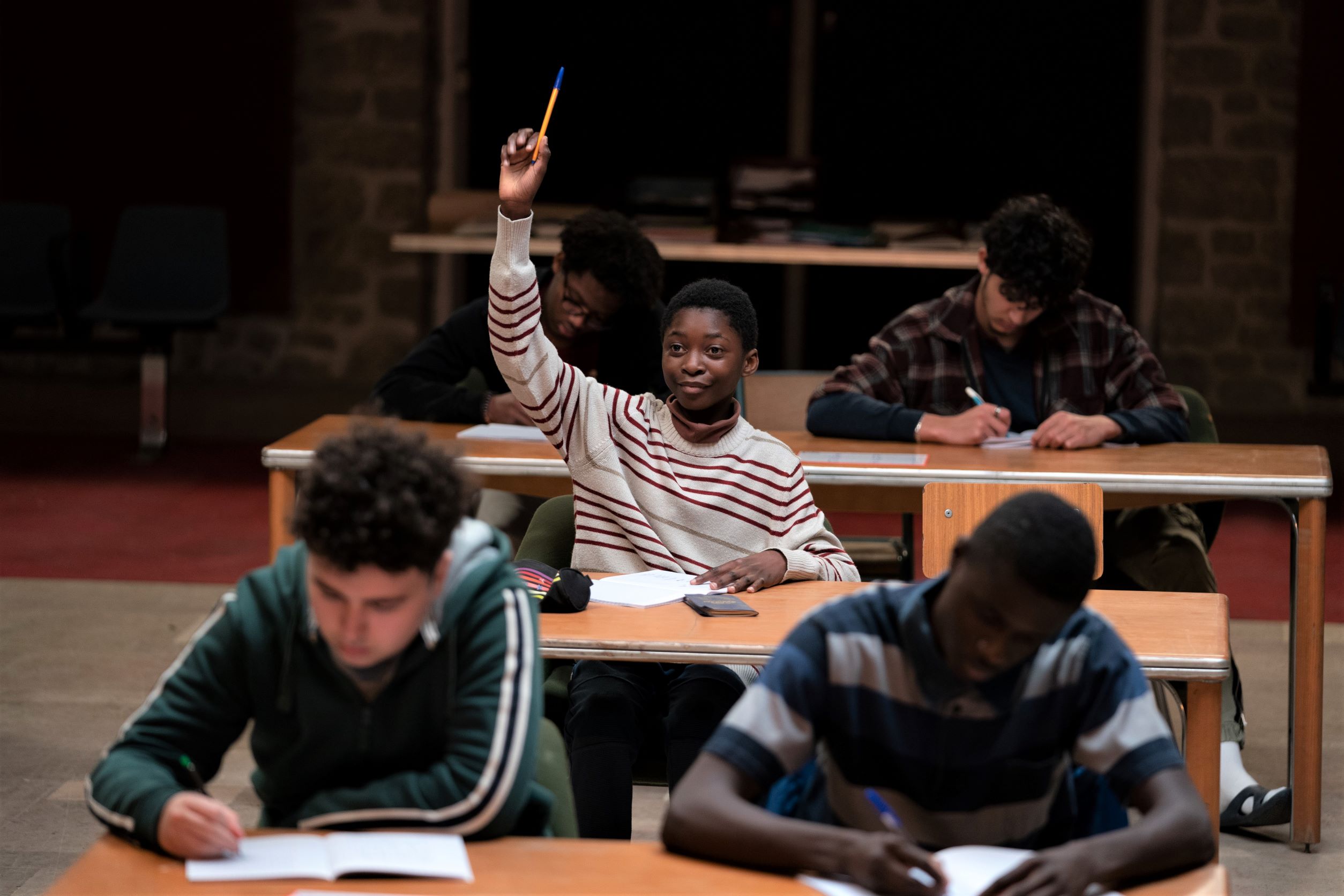 Yannick Kalombo as the ever enthusiastic GusGus.

The human face of a crisis

The Kitchen Brigade cleverly paints refugees in a different light, turning these ‘nobodies’ into people of tender beings of interest, substance and relevance. The best part, that of the youngest, GusGus, went to charismatic Yannick Kalombo, who’s a real hoot.

Jean-Louis Petit says his goal in making The Kitchen Brigade was “to pay tribute to all those young people with a difficult past and an uncertain future, who, in never losing hope of a better life, fight tirelessly to integrate into French society; and of course, to all those who devote so much time and energy in helping them … and to achieve a luminous, tender film full of hope, in which the comedy will never diminish the brutal reality faced by the characters.”

As feel-good movies go, it’s up there with the best of them. I might go back for a second helping. M5R

Photos: Alliance Française French Film Festival. The Kitchen Brigade is screening is distributed in Australia by Madman Films and is screening at Palace Cinemas and other arthouse cinemas.