The 2021 French Film Festival in Australia has provided great entertainment so far and there’s lots more to come. Sydney, Melbourne and Canberra are entering their encore screenings phase (until April 5), but Perth, Adelaide, Brisbane and Byron Bay still have a while to go. Parramatta will get its turn from April 8 to 11.

The festival is presented by the Alliance Française and Palace Cinemas, which will put some of the films on national release after the festival has ended.

My Five Romances has already written about the opening night film Eiffel and the hit of the year at the 2021 César awards, Adieu Les Cons (Bye Bye Morons). Here are five other films we’ve enjoyed and urge you to see before the 2021 French Film Festival closes.

Eavesdropping on phone calls made by international drug traffickers may sound like an exciting job, but Arabic-to-French translator Patience Portefeux (Isabelle Huppert) is leading a humdrum life. Even her romance with her police unit boss Philippe (Hippolyte Girardot) seems more routine work than fireworks. Then, in a brilliant moment of scriptwriting, the voice of someone she knows comes up on an intercepted call. She has to make a snap decision: where do her loyalties really lie? In an instant, the film becomes a terrific nail-biter.

Taking full advantage of her inside knowledge, Patience becomes puppet-master, leading and misleading, manipulating and thwarting the police, the drug deliverers and receivers, making enemies but also winning admirers for her new-found audacity. In the process she rediscovers the thrill and joy of living again, or more accurately, living on the edge.

La Doronne/The Godmother is a delight, infused with unexpected comedy and humour, particularly when a Chinese triad led by another maternal figure get involved. You can sense Patience/Huppert had great fun on parading on the fashion catwalk as she donned Arab attire and disguise. It’s a film I would quite happily watch again. 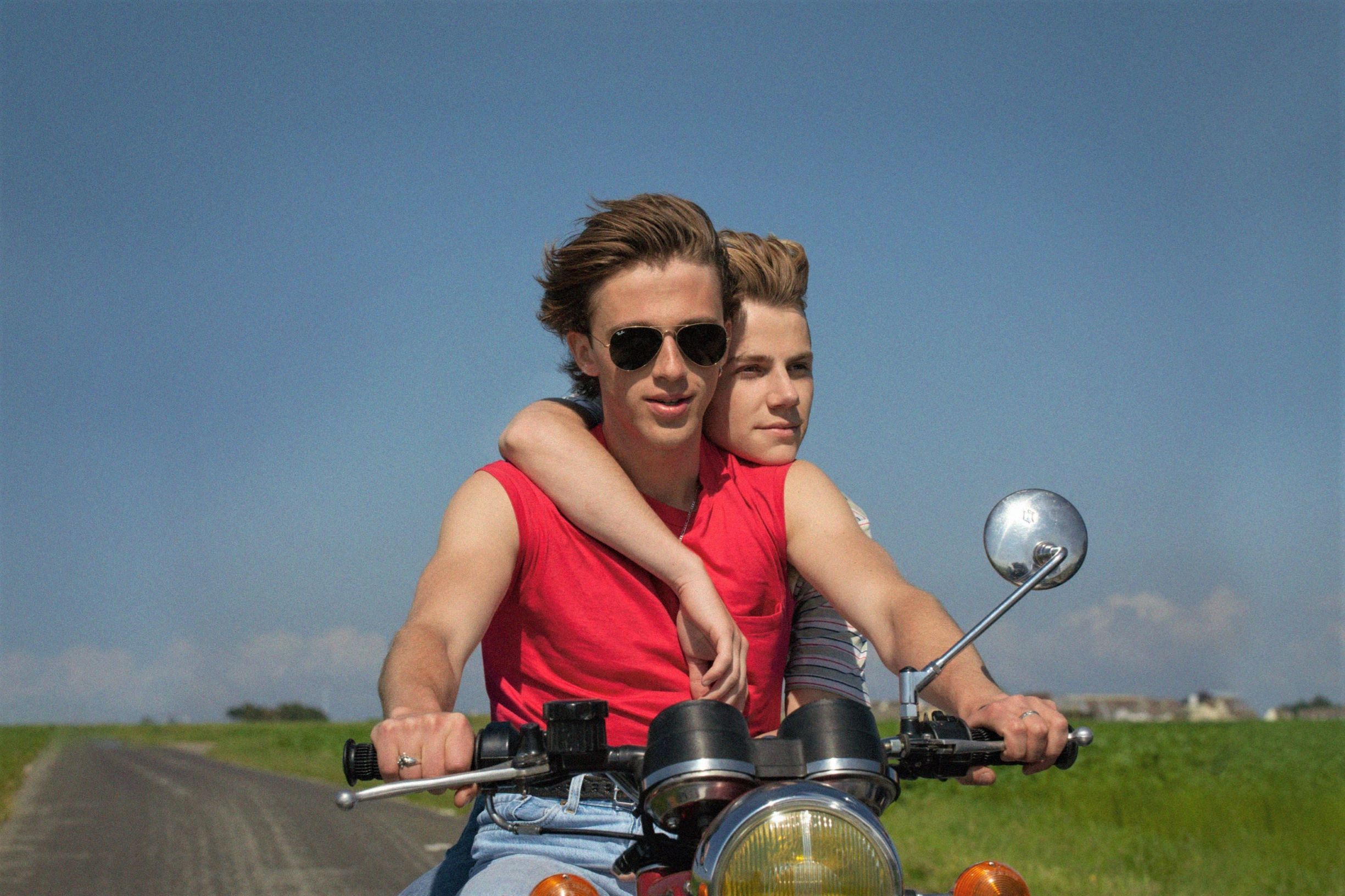 As you would expect from its title, Été 85 or Summer of 85  has a terrific 1980s soundtrack, paying particular homage to the exuberance of the 80s via The Cure’s In Between Days and the like, although it’s the 1975 hit Sailing by Rod Stewart that is given prominence in the most emotional scenes.

Essentially it’s a gay teen coming of age story. Sixteen-year-old Alexis (Félix Lefebvre) gets caught in storm while yachting off the coast of Normandy and his little craft capsizes. Au secours! Help! Out of the blue-black clouds, a gallant sailor – 18-year-old David (Benjamin Voisin) – emerges. By the time they’re back on shore and David takes Alexis home for a hot bath, it’s love/lust at first sight (director François Ozon doesn’t waste time). Oddly, however, it’s David’s oddball, creepy mum ‘Madame Gorman’ (wonderfully played by Valeria Bruni Tedeschi) who drags Alexis off to the bathrooom, pulls down his wet dripping shorts and underpants and bundles him into the tub.

This is no happy ever after film, though. We know from the opening scene that David is dead, and that Alexis has to face a juvenile court as a result. What happened? Did he murder him? Surely not! As the Alliance Française 2021 French Film Festival program notes put it: “Blending the sensuality of a Pedro Almodóvar film with the dark mystery of a Patricia Hindsmith novel, Summer of 85 is France’s edgier answer to Call Me By Your Name.” In fact, it’s Ozon’s adaptation of Aidan Chambers’ 1982 novel, Dance On My Grave.

First loves are never easy – we’re too immature, our feelings too intense. We soar to emotional highs and plunge to the depths when things fizzle out. Holiday flings especially can be an emotional roller-caoster. Été 85 captures this brilliantly although the shift in mood is abrupt and surprisingly brutal. (Like I said, Ozon doesn’t waste time. He’s made 40 films in his lifetime and he’s only 53!)

Anyone who’s interested in learning French as a second language will be interested in Belgian-born British actress Philippine Velge’s portrayal of Kate, the English girl on holiday who unintentionally drives a wedge between David and Alexis but at the same time comes to the latter’s emotional rescue. Velge is fluent in French (she speaks it with her father) but does an excellent job of dumbing it down, giving Kate a cringeworthy Pommie-sounding French accent.

I’m not being snobbish or judgemental. The scenery is pretty stunning too. Été 85 was filmed in and around in the scenic coastal town of Le Tréport, in Seine-Maritime region of Normandy. It’s some 35km north of Dieppe, where I had my first holiday in France as a timid young adult travelling solo. If I were to hear my efforts at speaking French then, I’m sure I’d cringe at myself now. But it’s better to learn and speak badly than not speak at all.

Été 85 was nominated in 12 categories at the 2021 César Awards including best film, best director and best cinematography.  Lefebvre and Voisin were both nominated for most promising actor, Valeria Bruni Tedeschi for best supporting actress. Sadly for those involved, the film didn’t win one César, but don’t let that put you off or detract from its merits. 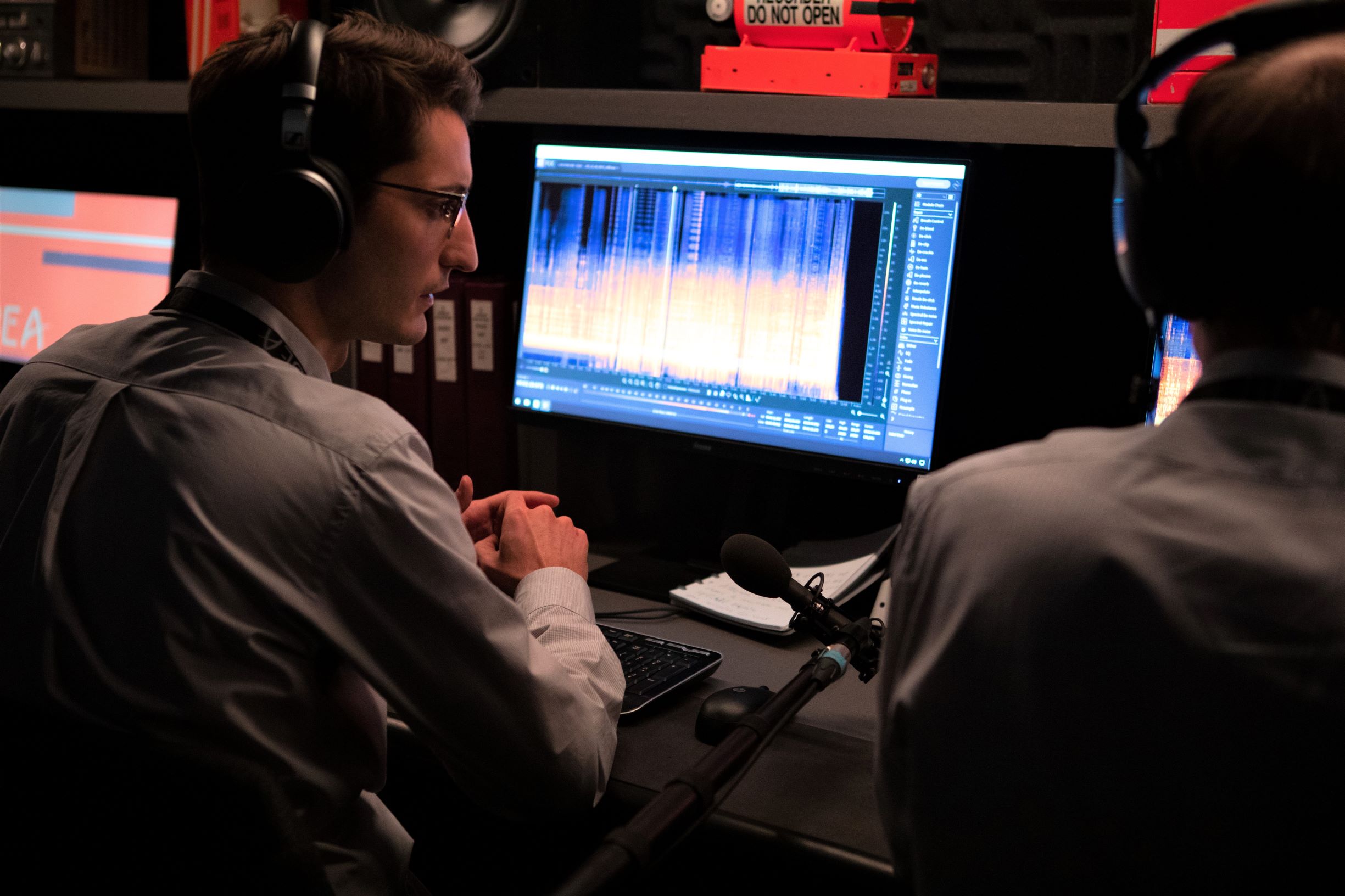 The last time I saw Pierre Niney on the big screen it was Frantz, an excellent post-First World War film directed by the above-mentioned François Ozon. In Boîte Noire/Black Box Niney again plays an intense, troubled young man, Mathieu, a top black box analyst tasked with investigating the horrific crash of a brand new plane on a flight from Dubai to Paris.

It’s a spell-binding film in many ways. Frustratingly, the crashed plane’s black box gives no clear answers, and as Mathieu becomes increasingly frustrated and fixated on finding an outcome, he becomes a rogue operator. Suspecting corruption in the airline industry, he adopts unorthodox methods, including industrial espionage. Niney gives an excellent as a man who becomes so obsessed he will stop at nothing until he is proved right, even if it involves personal betrayals and putting his life at risk.

It’s also a fascinating look at what air crash investigators do and what goes into the making of commercial aircraft these days. Are their fail-safe computer systems really safe? Or can they be hacked? This is not a film to watch if you’re planning on boarding a plane soon, but it’s enthralling entertainment in other circumstances. 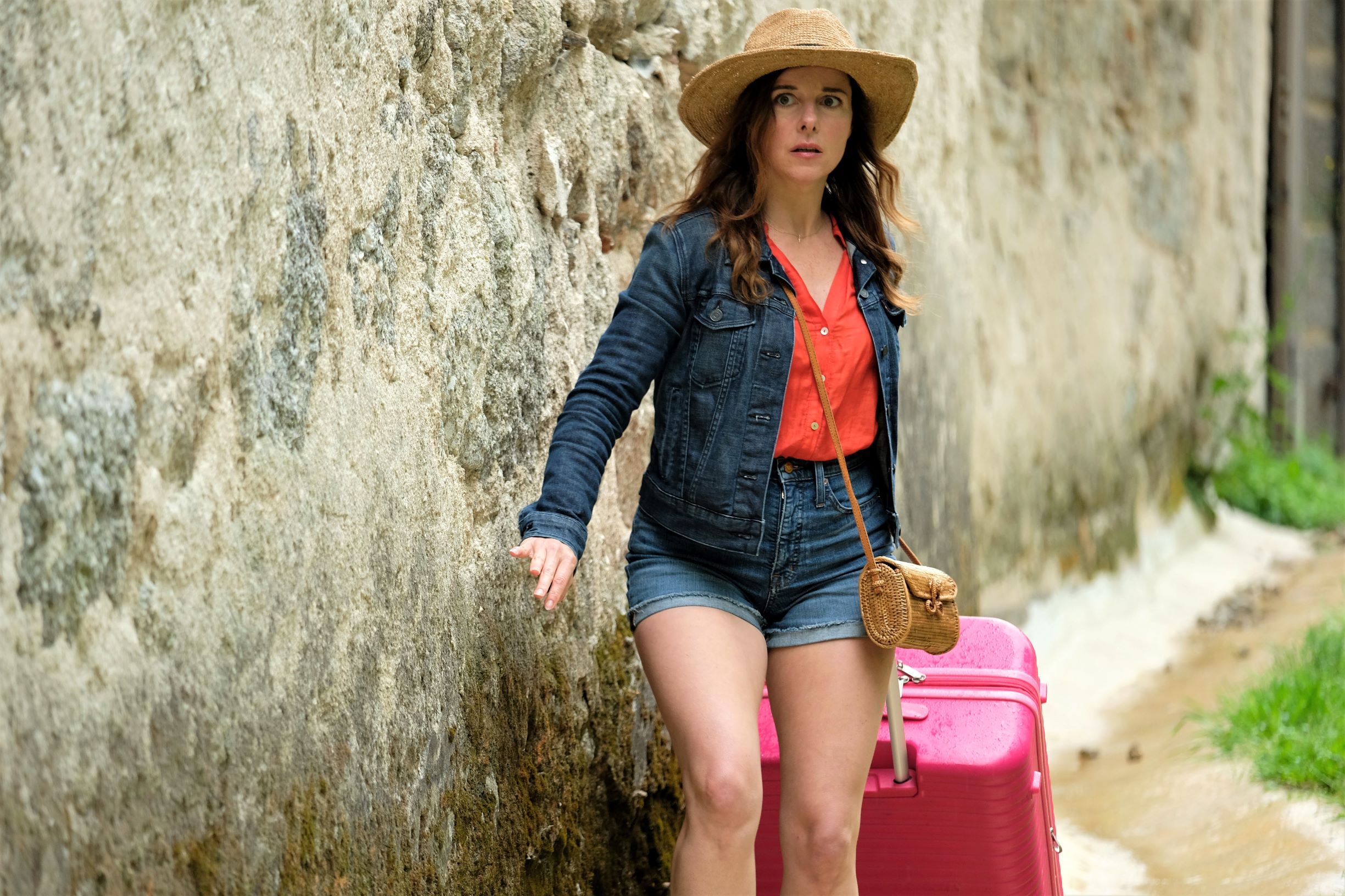 Laure Calamy won the 2021 César best actress award for her performance as Antoinette, a ditzy, immature primary school teacher ‘blessed’ with appalling judgement and an ability to fall head over heels in love with the wrong men for all the wrong reasons.

So when she learns at the last minute that her married lover Vladimir (Benjamin Lavernhe) can’t spend the summer school holidays with her because he has to go hiking with his family in the Cévennes, she signs up to do a hike over the same territory too (the Robert Louis Stevenson donkey trail). What could possibly go wrong?

Next she’s almost falling head over her high heels going up and down the challenging slopes of the Cévennes National Park with a very stubborn donkey called Patrick in tow. Within 24 hours it seems that everyone on hiking in the park – except possibly Benjamin’s wife – knows she’s having an affair with a married man and that she’s come to pursue him. She’s the talk of all the towns, so to speak,but up in the mountains they’re really little hamlets.

The main co-star of the film, Patrick the donkey, turns out to be a surprisingly protective companion and provides some of the best laughs in what is essentially an amiable comedy. As with any ‘fish out of water’-type film, we know that after a week of soul-searching en route, Antoinette will come out older and wiser, but things are never predictable. It’s a pleasantly entertaining film, even if it’s not as profound as it could have been. 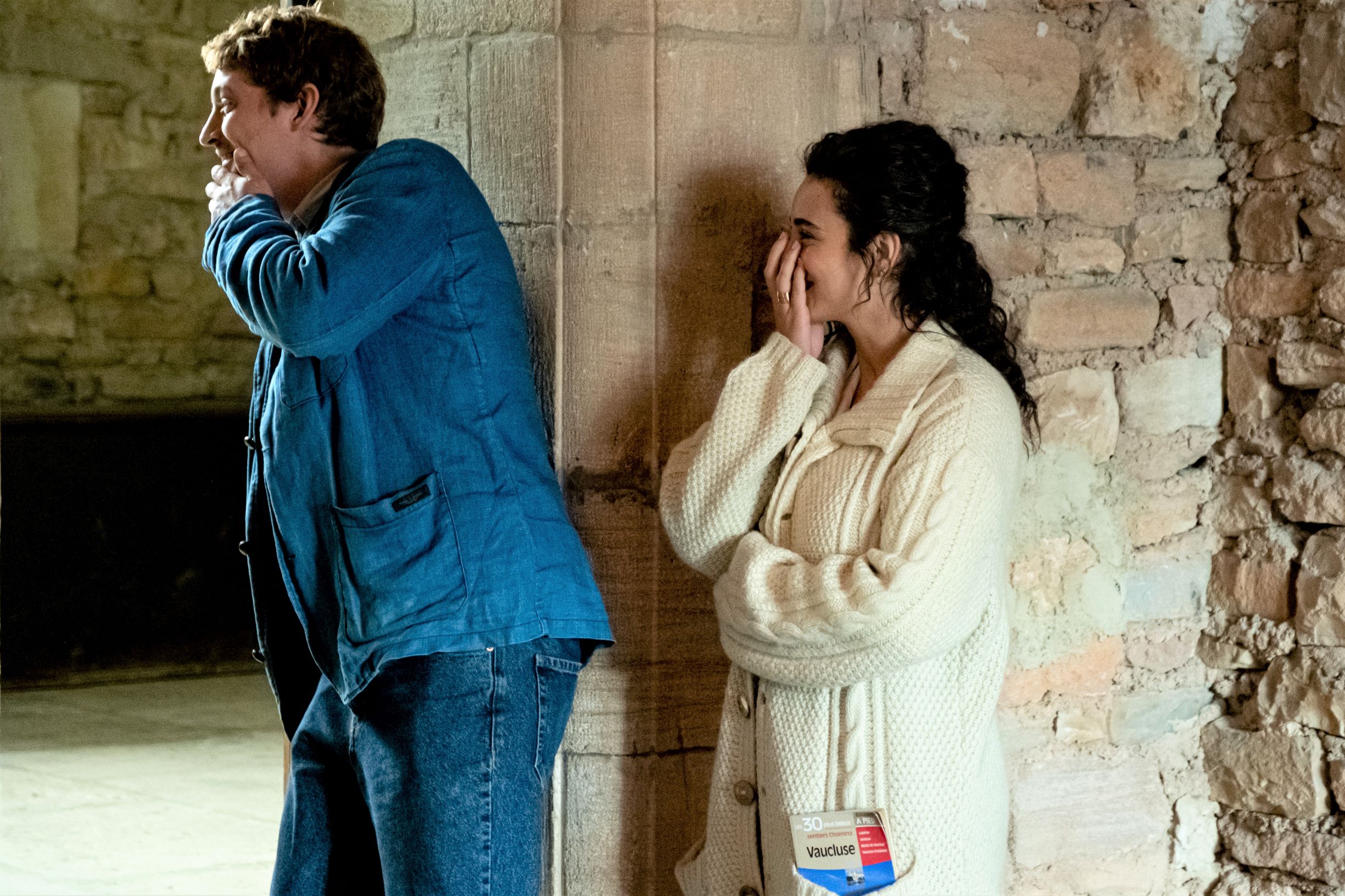 Niels Schneider and Camélia Jordana have a giggle in Love Affair(s).

Love Affair(s) arrived at the French Film Festival with great expectations, having been nominated in 13 categories at the 2021 César awards. Even though it won just one – Émilie Dequenne for best supporting actress – it’s a terrific film and I wouldn’t have been surprised if it had dominated the Césars.

The French title means The Things One Says, The Things One Does. It’s a very French (i.e. genteel, thoroughly analysed and rationalised) examination of relationships, most of which are conducted outside the bounds of marriage or behind a partner’s back. As the English title suggests, the focus would appear to be on one particular love affair, or a potential love affair, but there’s a lot more happening on the sidelines. The narrative shifts around among the talented ensemble cast, but Emmanuel Mouret’s clever scripted is peppered with unexpected twists. Just when you think you know one couple’s story, suddenly you see it in a totally different light. A minor character suddenly becomes major. Bit players introduce important new bits.

Much of the story is propelled by the growing sexual tensions between Daphné (played by Camélia Jordana) and Maxime (Niels Schneider), who comes to stay at the country house she shares with François (Vincent Macaigne). But François is Maxime’s cousin and Daphné is in early pregnancy. For Daphné and Maxime it is a game of lead us not into temptation when it seems that everyone else is being led into temptation!

The Goddess of Fortune delivers a welcome last laugh