It’s not often that a Portuguese film gets a run in mainstream cinemas in Australia – well, mainstream arthouse cinemas – but Tabu has been going for a good month or two now, after getting consistently good reviews. The film is in three parts; a rather peculiar prologue involving a melancholic hunter in search of a crocodile; then “Paradise Lost”, an at times ponderous introduction to the main characters in their old age in Lisbon. But the third bit – called “Paradise” and set in Africa in the 1960s – is utterly absorbing.

Tabu was directed by Miguel Gomes, and won awards at the Berlin Film Festival. It was filmed in Mozambique in the province of Zambezia (a place which is quite trendy at the moment – the children’s animated film Zambezia is now showing in Australia and other countries). It is called Tabu because much of the action takes place near a fictional Mount Tabu.  Tabu is also the Portuguese word for taboo. And yes, it is about a forbidden love: a married woman falls for another man. 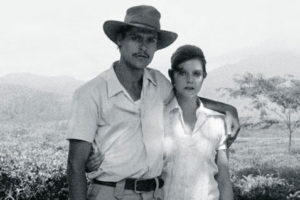 The whole film was shot in black and white but the lighting is brilliant, as indeed is the use of sound or – cleverly – the lack of it. The scene where the lovers – played by Carloto Cotta and Ana Moreira (pictured right) – meet for the first time, for example, is shot in silence. They are with a group of mutual friends who are nattering away in the background but all that matters is the glances between the two main characters. Not many actors can carry such a crucial scene using facial expressions alone, but these two do it brilliantly. You know instantly that they will become lovers, and sense that it will lead them into trouble.

At other crucial times in the film the voices and noises of the humans are removed, but you can hear something in the background – the ominous cry of a bird, for example.

Crocodiles, too, play an important symbolic role. Just don’t ask me what the symbolism is! In one scene, for example, Aurora, the married woman, is given a baby crocodile as a birthday present by her husband. In one interview, Gomes, when asked about the significance of  the crocodiles, said he viewed them as ancient creatures who had seen a lot more than humans (life expectancy being quite low for most of human history, and hence the crocodiles could be symbolic of memory. But he added that the audience’s interpretation of scenes in his films were more important to him than his own.

Taboo in other Romance languages:

In the first three and in Portuguese it is a masculine word, in Romanian it is neuter.

The Out Of Africa comparison

On one of the film’s poster above, there is the quote, which is spoken by the narrator in the third part of the film: “Aurora had a farm in Africa, at the foot of Mount Tabu.”

The Ngong Hills in Kenya.

That, surely, must be a reference to the opening sentence of Karen Blixen‘s memoir Out of Africa:  “I had a farm in Africa, at the foot of the Ngong Hills.”

It is an opening line that resonates with me. I was born in Africa in the suburb of Karen (named after Karen Blixen) on the outskirts of Nairobi, and I can remember going for walks in the Ngong Hills as a kid. In fact, my parents had a painting of the Ngong Hills which used to hang on the wall of the lounge of the various houses we lived in.

When I was last in Portugal I bought the Portuguese version of Karen Blixsen’s book, África Minha (My Africa), translated by Ana Falcão Bastos. The opening line in that book is rendered as “Tive uma fazenda em África, no sopé das montanhas Ngongo.”

Out of Africa, I am sure many of you will know, was made into a film in 1985, starring Robert Redford and Meryl Streep. It won seven Oscars and as a result for a while Africa was en vogue. Everyone wanted to go on romantic safaris and have picnics and sip champagne while elephants and flamingoes roamed peacefully in the background as a glorious sun was setting.

Really interesting post. I had not heard of this film, but I will take a look to see if it will make it to the UK.

Good luck with the search. I am surprised it actually made it into Australian cinemas. Thanks for your feedback.

Hey, also hope it makes the UK …. makes me remember the movie nights we had before children!!!! We would choose a movie & the others in the club had to watch. I discovered many genres i thought i would never enjoy!
Thanks for the great review & a respark to see “art” movies!
xx

It took a year to come to Australia so it might have come and gone in the UK by now….